This is another photo from Janice, it is part of the Dyer Mystery Album. 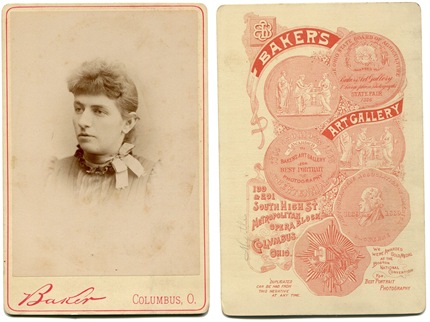 Baker of Columbus, O was the photographer. During the 1880’s is was very common for a photographer to display his medals on the back of his work.  He won lots of awards too..the last one featured on this Cabinet Card was in 1889.  So we can date this photo 1889 or 1890.
This young lady has a pin at the neckline of her dress and a ribbon that is tied around her neck. Her hair is pulled back and braided, or pulled into a low bun. All things that suggest the late 1880’s.

Her name is Myrtle..that is it ..it is the only clue we have.

Update: Iggy and Abra have been doing their magic!

From Abra:
I found a Myrtle Dyer, wife of Lemuel, in the 1930 census, with three children (Vivian, Richard, Robert). She was born about 1876. Looking back, the 1910 census has them living in West Virginia, married 4 years, 2 children (Vivian & Richard), neighbors to Frank Dyer family, also born in Ohio(possibly Lemuel's brother). Frank & Lemuel are working in the oil wells. In 1920, they are living in Clinton Twshp/Shreve Village, Wayne Co. Ohio. Lemuel is an oil pumper for Preston Oil Co. in both the 1920 & 1930 censuses.


Found a public family tree with Myrtle VanSchoyck, married to Lemuel Dyer. Her parents are George Washington VanSchoyck and Arminta Davidson. These would be some names to look for in connection with the album. Her siblings are Wayne(spouse Edith Schale), Minnie(spouse William Fishinger), Harvey(spouse Lenora ?), Aubrey(spouse Nellie Proctor), Inez(marriage/spouse unknown)Clay(Irene Tinnon), and Monyleta(marriage/spouse unknown)