This Full Circle began when Mark left a comment on the blog.  His Grandmother was in the photo. 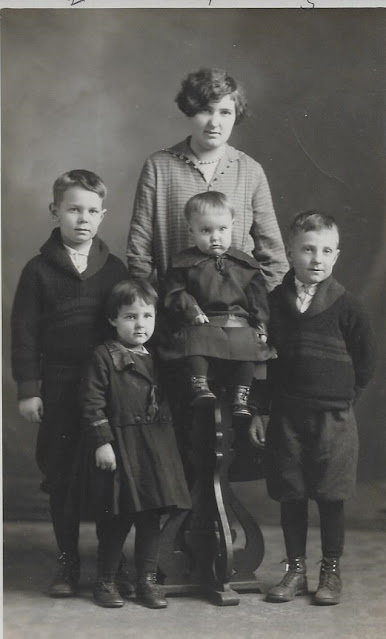 Thank you for contacting me.

The oldest one in the photo is Lavern Solum.  She is my grandmother.  She married Ed Fingalson and had one child, Violette.
She passed away when my mother was 8 so obviously I never new her.  My grandfather Ed Fingalson also passed before I was born.
The youngest in the photo is Blanch Solum, but she was not he youngest child.  That would be Arnold.  He never married and passed away in 2014.
Arnold was a Korean vet and I knew him to be an excellent carpenter.  He was a good guy, too bad he isnt on the photo.
Blanch married Roy Englund and had one son Richard.
Although I met Alvina and Blanch I never really got to know them very well.
I managed to meet Lawrence about 3 - 4 years before he passed.
I never any of the rest of them.
Their parents were Knute and Esther Solum.  Esther Solum's maiden name was Leegard.
Blanch and Arnold lived in Detroit Lakes, MN.  (also where I grew up).
I mailed the postcard and it was received.
Thanks for stopping by. 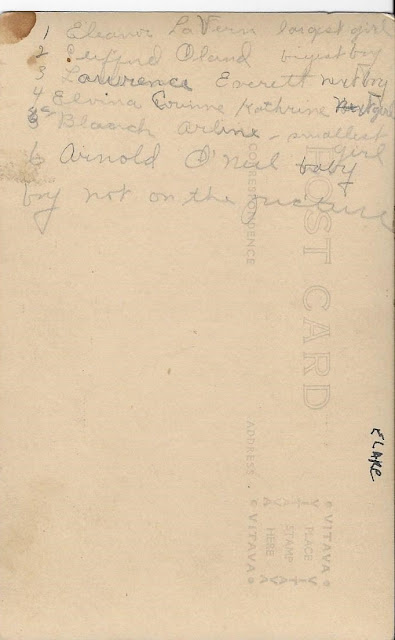 Thank you ever so much for the photo of GH Clevenger.  I was young (25 years old) when he died so I didn't know him. He was a well known metallurgist then my father Galen William also was and I became a mining engineer.  Thanks again Jeff

This Full Circle started with an email.


Hello, I’ve bought a farm and house with original buildings that I live in and am restoring. I’ve been researching the property and found the original owner/builder’s name and a plot map showing what he owned. I live in Delavan WI near sugar creek.  Photo 1112 is the man who built my home and there isn’t much I wouldn’t do to try and hang that in my home could you help? Aaron 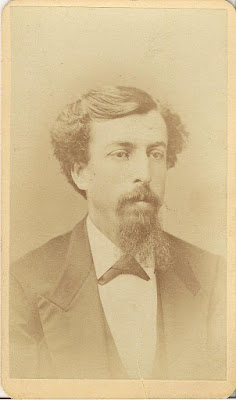 I mailed the photo.

Sorry for delay! Hope you’re staying healthy.  I got the photo, thank you so much.  I bought this house which is a very old farm. Original barn burnt down in the 30’s and a new barn was built shortly after. The house has a lot of original stuff and I have found clues all over property of what once was. I found a land owner map from 1875 with my property marked as a working farm owned by h. Coleman.  The adjacent property was owned by E.s Coleman. H. Coleman had a son so he must have given him the property. The was another H Coleman I found in Wisconsin, but it was early 1900s when he was young. This picture has to be my original homeowner. All the family is buried together just up the Road from here.

Always nice to send a photo "home"  this time to a place...I was happy with that!
Thanks for stopping by
Posted by Far Side of Fifty at 6:53 PM 5 comments:

I received an email about an old postcard with the name Bonnie Bittner. 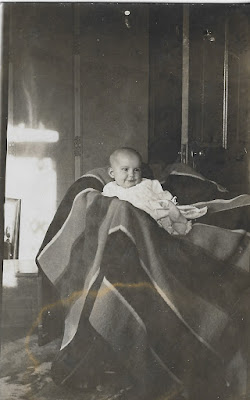 Photo Number 2116
I sent the postcard to Bonnie's daughter Paula.

I have received the postcard and in amazing condition.  Thank you so much.  It is a great service you all do for others.


Thanks for stopping by.
Posted by Far Side of Fifty at 2:40 PM 5 comments:

Hello, and thank you so much for your kindness in posting these old forgotten photos online for families to find. Yes, this is indeed Robert Bower Eckles, born Apr. 11, 1910 in York, York, NE. and died Jan. 22, 1993 in San Antonio, Bexar County, TX. I am writing on behalf of his daughter, Sarah, who would love to have this photo!How can we make this happen?Chloe 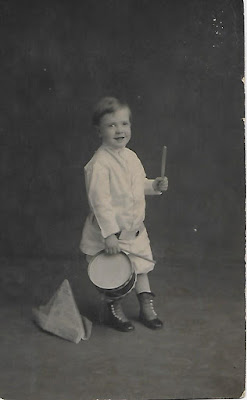 I mailed off the card.  Chloe had lots of information to share.

Robert Bower Eckles, born 1910 in York, Nebraska, was the son of Dr. & Mrs. Warren Eckles.  (Dr. Eckles was an optician and an Eye, Ear, Nose & Throat Specialist.)
Robert graduated Harvard with magna cum laude honors. He was elected President of the Harvard Debating Council and was member of the Harvard Dramatic Club, the Hasty Pudding club and the Fifty-Four club. He was instrumental in putting the first international college debate over the radio, when Harvard debated Oxford in 1931.
During the summer of his Junior year, he taught modern history at York college in Nebraska.
After graduation, he attended Queen’s College at Oxford  University in England  working towards a PH.D. in history and earned a Doctorate in Philosophy from Harvard.
In 1935, he married Rachel Burhans Miller, teacher at the Bishop Lee Dramatic School in Boston, Massachusetts.
He was hired as head of the department of English history at Stephens College in Missouri, then taught at Culver Military Academy in Indiana and Ohio University, Athens, OH. before accepting a faculty appointment teaching European History and Western Civilization at Purdue University in 1945.
He published several articles, a textbook and two books: ‘The Dean: A Biography of A. A. Potter’ and ‘Purdue Pharmacy: The First Century.’
In addition, Robert served as a Fellow in the Royal Historical Society of Great Britain and a chair member of  the American Historical Association's Committee on Microfilming. He took a three year leave of absence from Purdue University to direct the Indiana Historical Society's Natural History Gas Project. He later became the president of the American Microform Academy in Boston, became the co-founder of the Midwest Conference on British History, and served as executive secretary and chair of the Advisory Committee on the Franklin J. Matchette Foundation.
Robert’s daughter, Sarah, remembers that her father was a bon vivant who was full of humor and cheer and could hold court almost anywhere.  He did a spot-on Truman Capote imitation, and had a fabulous sense of humor.  He was absolutely appreciated and adored by his students for all those years he taught.  He had a lust for knowledge, travel, books, brilliant conversation and fine food.  Sarah and her sister, Alison, used to joke that he was like an English country Squire, a refined gentleman and a fabulous host.  They remember him as being very generous and having a great spirit for helping others whenever he could.

And a photo of Robert's daughter Sarah

Sarah sent me a lovely Thank you note.

Dear Connie, Thank you so much for finding my fathers Robert Bower Eckles photo with his little drum!  Your generous gift to me and my friend Chloe is so wonderful  Sincerely Sarah

This Full Circle began when Karen left a comment on the blog.

Inez Nelson (Regan) was my mother. She and my father, Eugene Regan
had 5 kids, Steve, Mare, Mike, Cath and Karen. Everyone’s info was quite correct about
Inez’s parents and date of birth and death. The card was sent to Iver’s Sister, my mother’s aunt.
I couldn’t believe that I stubbled on to this website, it has been a gift that these postcards were saved,
so we can see a part of our family history. By the way, intense guy thought maybe Ralphie may
want the photograph, Ralphie was our dad’s orange tabby cat. Karen


My name is Karen , the youngest of 5 kids of Inez and Gene Regan.
I had responded to your website about the postcard of my mother’s
baptismal picture. I couldn’t believe that she was on your website, she would
be in shock if she were still here. You mentioned that you could send it and if
you still have it, I would love it! I will pay the postage. I love that you got all
these photos and put them online, and it’s such a shame that others just
clean out their family’s homes and dump family history. I hope I am talking to
the right person. Thanks, Karen

I mailed the postcard. 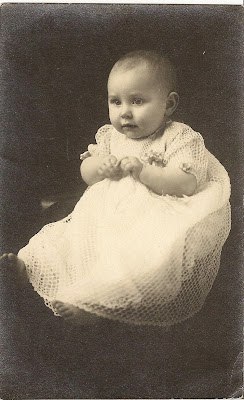 Karen sent a lovely card
Thanks for sending the postcard of my mother from 1917 in her baptismal gown.  I can't believe how new the card looks from over 100 years ago..  Thanks for collecting all these cool cards and starting up such a great website, it means a lot to me to have this postcard in my hand! I threw in a few extra dollars for those who may not have the money to have a card sent to them.  Thanks for such a great service!  Karen

I must take a pause from the blog.  I will post when I can.  My husband is being evaluated for a Lung Transplant.  I have many loose ends to take care of and find it impossible to keep up with everything on my plate at this time.

If you happen by the blog because I have a photo of your relatives please send me an email captainconnie2001atyahoodotcom I will be checking my email however it may take me some time to get a photo off in the mail.

We are hopeful that my husband will be put on the transplant list after all the testing has been accomplished.  He has a genetic condition called Alpha- 1 Antitrypsin Deficiency that has damaged his lungs, he has just 21 % lung function.  If you know of anyone with breathing problems encourage them to be tested for this deficiency.  Tests are free and the forms can be found here.