This is a Cabinet Card that I purchased at the Antique Mall in Detroit Lakes, Minnesota. 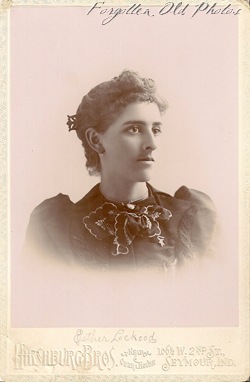 There I darkened the bottom part of the Cabinet Card.  Esther Lockood ( Lockwood?), she has a beautiful small hair comb, earrings, a necklace with what appears to be a ring and a heart shaped locket, she also has a star shaped pin and a watch chain.  The lapels on her jacket are ornate and very large.

On the back of the Cabinet Card the name Eliza appears.
I think this photo was taken sometime between 1890 and 1900.  Hirshburg Bros. of Seymour, IND. was the photographer.


Her husband Stephen was born 1866 and died in 1931. They are buried in Union Township, Gibson County, Indiana.


They had one daughter for sure  Fay Lockwood who died on September 07, 1894 at the age of 10 months and 22 days.  Her Headstone is at the Walnut Hill Cemetery in Indiana.

Esther was Jessie Glenn's Mother, I was not sure. It seems that Esther was 26 years younger than her husband.