A short time ago I featured a photo of a little baby girl. 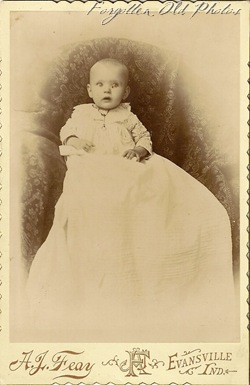 I often put photos in my to do files..and get them out and scan them in batches…well I was scanning the other day and low and behold I found another photo of Jessie Glenn!  I often visit a dealer in the Antique Mall in Detroit Lakes and I must have purchased the photos on two separate days. Both of these photos are Cabinet Cards. 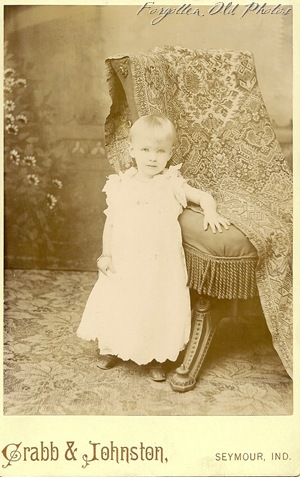 The writing is very faint…Jessie Glenn Lockwood Age 18 months.  That means that this photo was taken in June of 1892.

Update March 24, 2011: Iggy has located a relative and the photos will be mailed in the morning to Greg.


We also heard from Chris:
Jessie Glen Lockwood was mother to my mom's stepfather, Robert Edgar Wright. I believe you've already contacted my uncle in Princeton. He runs the jewelry store there that his father, Robert, started many years ago in Evansville.

Glen, as she was called, was born in Indiana 28 Dec 1890 and died 5 Jun 1963 in Fort Branch. She and Edgar married in 1916, Evansville. He was a telegrapher for the railroad, working the depots at Owensville, Fort Branch and Princeton.