I purchased this Cabinet Card at the Antique Mall in Detroit Lakes, Minnesota. 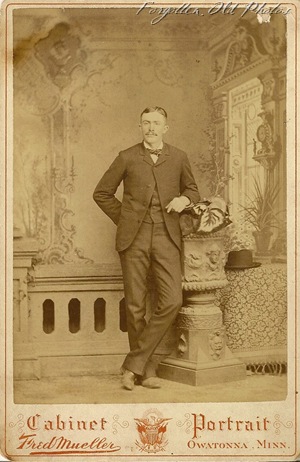 I will have to remember that this photographer likes to pose people in a relaxed pose with all their weight on one foot. This is a Photo by Fred Mueller of Owatonna, Minn.  Fred was in business in 1894 and 1895.

Philip Mc Carthy Died October 1, 1894.
The photo was obviously taken before he died..as it is not one of those death photos.

I wonder what caused a seemingly healthy young man to die after posing on one foot by some beautiful Rex Begonias after throwing you hat off on the table.  He looks like he just strolled in after a busy day of overseeing his crops.

The backdrop in this photo is one of a fancy country home..probably a type of home that was never found in Minnesota in the 1880’s…but it was a photographers trend during those years to use a fancy backdrop.

Update from Iggy:
From the Minnesota State Census of 1885
He was single, son of James and Bridget McCarthy - but he had a lot of brothers and sisters.


A death record from Dodge county (Ellington is in Dodge county) said Philip died on 01 Oct 1894 and was a farmer.

Update from Iggy:
Following up on this - I found some census records that may indicate Philip McCarthy had a son - In the Minnesota State Census, 1895 a one year old boy, Willis Mccarthy (b. Oct 1893) is listed living with Philip's parents. He is listed as a grandson in the 1900 US census. I can't find him in the 1910 US census, but he reappears in the 1920 census living with one of Philip's brothers - Davis McCarthy in West Concord, Dodge County, Minnesota. He is listed as a nephew, single and now 26 years old.I lose him at this point.Philip was first born and had (at least) four younger siblings according to the Minnesota State Census of 1885.-James Mccarthy M 17y (1868)-John Mccarthy M 15y (1870)-David Mccarthy M 14y (1871)-Alice Mccarthy F 9y (1876)Willis appears to have been either Philip's son or John's son. Both Philip and John are missing from the family in the 1895 census.

Update from Anonymous:
Philip is my great uncle. the 1 yr.old boy was his brother's son,mother died and willis was raised by grandparents.Philip was killed by a horse.