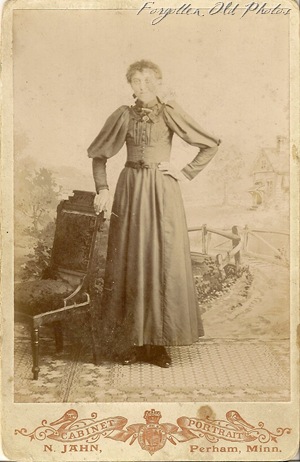 This is another Cabinet Card from Detroit Lakes, Minnesota.
The photographer is N. Jahn, he was in Perham Minnesota in 1902.  I loved the backdrop in this photo..just walking down a country lane and stopped near a chair.  My goodness she is a thin lady.

Update from crex:
There is an Anna Semmerling who died 29 April 1912 in Perham, Otter Tail, Minnesota, but she was born as late as 1884.


Update from Iggy:
In the 1900 and 1910 US Census she is listed as Anna and then Annie Semerling (single "m"). She appears to be the only offspring of Franz/Frank and Franiska/Francis nee Potrefki Semerling, who moved to the US from Poland/Germany. It appears that Anna never married and had no offspring. The census/death records vary on her birthdate - some say 1882, and some say 1884.

Anna's mother died on 29 Sep 1918. If Anna had any neices or nephews - they will be hard to find given the uncertain spelling.
Posted by Far Side of Fifty at 4:15 AM