This Full Circle began when a gal left a comment on the blog.

I am the great-grand-daughter of Lewis H. Gilbert, brother of Edgar T. Gilbert. I am not able to identify any direct descendants for Edgar, and he is buried with Lewis and the rest of Lewis's family in Mount Hope Cemetery, as mentioned above. There is a collection of family photos lining the staircase of the house Lewis built in 1907. It would be lovely to reunite Edgar with his family if you still have the photo. 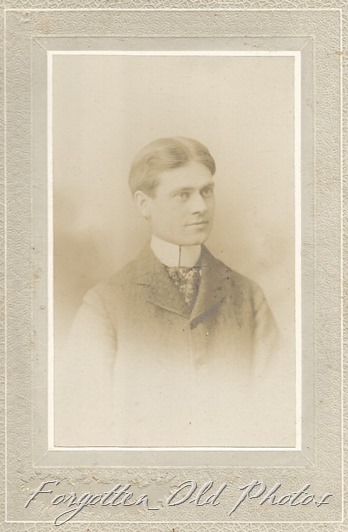 I mailed the photo and didn’t hear anything else…so I declare this photo Full Circle.

It’s amazing to think this photo made its way from Rochester, NY to Minnesota.  I was actually researching Edgar’s father, Truman Gilbert who was from central New York and an early pioneer to Clintonville (now, South Elgin) Illinois in 1835.  After his first wife died, Truman married another woman, Ann Ryder, who is the mother of Edgar and Lewis.  Both young men and their mother made their way back east to Rochester after Truman died.  Lewis became a dentist and Edgar a manufacturer of “shoe polishers and similar articles.”  Edgar also holds a patent for a cork shoe-liner which was supposed to improve comfort in your shoes/boots.

I currently live in New York City with my husband and 2 children, but my mother still lives in the house where I was raised in Rochester; the house Lewis Gilbert built in 1907.  Since I’ve begun my work on ancestry.com I’ve been labeling several old photographs that were in the attic and lining the staircase wall with them.  So glad you found Edgar!