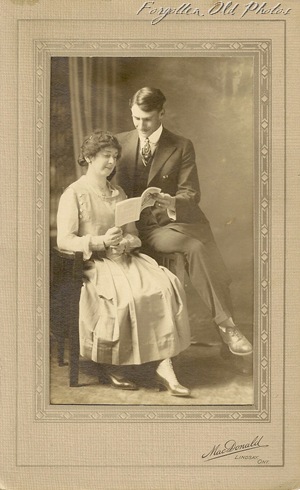 I purchased this photo at the Antique Shop in Motley, Minnesota..the one with the Ice Cream Shop.  No, I did not have Ice Cream..but there are two Antiques Shops in town and I had to distinguish between the two.
I bought this photograph because of her shoes.

I think she looks much older than him and believe it to be a Mother and Son..although I am often wrong.
( Many of the readers think that this is a couple..they could correct! )

This photo was taken by a photographer named MacDonald at Lindsay ONT. When I took the photo out to check for names I found it to be a Real Photo Postcard, an Azo from the years 1904 to 1918.  I think that the womans clothing leans more toward the 1918’s.

Update from Norkio:
I would also agree as to her fashion being closer to 1918 with the slightly raised hem of her skirt. Even a couple inches was scandalous! :-)

BTW you can still buy those boots. I have had several pair over the years and they are very comfortable. These were probably made from a double last making them actual left and right shoes and like what we wear today. Shoes in the 19th century were made on a single last and you broke them in to your feet.
Posted by Far Side of Fifty at 4:33 AM