Today I have two old photos..they may be the same person or maybe not. I got them at the same Antique Mall in Grand Forks, North Dakota as the photo yesterday of Ann Foster Haines.  These are all CdV or Cartes d’ visite or visiting cards. 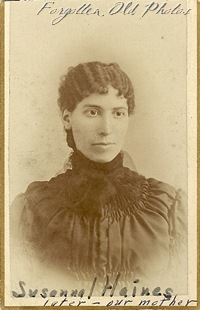 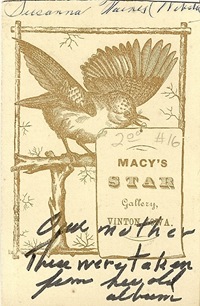 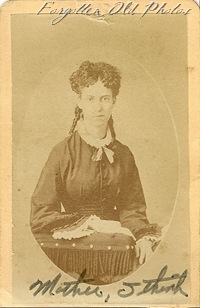 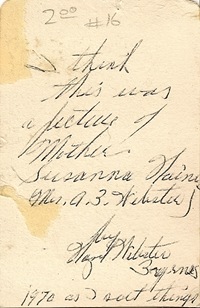 I believe that Susanna Haines Webster was born about 1857 ( She was three years old in the 1860 census)
She was married to Abel B. Webster and they had a daughter named Hazel Webster Byrnes who was born July 29, 1886 in Charles City, Iowa.

Hazel was a well known North Dakota woman.  She helped to start the Library at Mayville, ND State College.  She was instrumental in bringing about the first Bookmobile project in North Dakota.  She died in 1980.  I found no mention of children or siblings.  She has a collection of her papers about her personal and public life at the Chester Fritz Library at the University of North Dakota.

It was nice of Hazel to leave us some clues to track..but I have come to a dead end..

Perhaps Abra has some information to add. 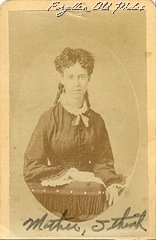 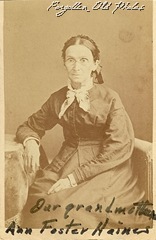 I think that the second photo was probably taken about the same time as the photo of Ann Foster Haines yesterday..the paper is similar..although the backing has been stripped away on Susanna’s photo.  They are wearing very similar ties around their neck..so I will guess that this second photo was taken in 1877 on a trip back to New Jersey.  Mother and daughter sitting for a photo on the same day.  I wonder why they traveled back to New Jersey..perhaps Ann just wanted to visit family as Abra suggested yesterday.  If I am correct with the 1877 date Susanna would have been 20 years old in this photo and her Mother Ann would have been 56 years old…Ann died in 1881 at the age of 60.

The first photo at the top of this post is a later one perhaps it was taken just before Susanna got married..sometime before 1886 because that is when Hazel was born.

Thanks for stopping by, do come again:)
Update from Abra:
Susanna and Abel had two children: Hazel and Deo. Abel died in 1921; Susanna remarried in 1925 to Archibald Todd Weatherwax. She died in 1926.
As you showed, Hazel was a busy woman. I do not believe she had children. In the 1920 census, Frank and Hazel are living in Swea City Iowa, where he is the Superintendent of the Public School. She is not employed. They are caring for their niece, Phylis Boyd. By 1930, they are living in North Dakota, where Hazel is listed as married and a boarder at Mayville Teacher's College, working as a teacher. Frank is living in Nash, North Dakota, Head of household, married, and has a boarder living with him. His occupation: farmer. So, he took up farming, and she went to teaching. There were no children in either census, and by 1930, she is 43. In one family tree, her occupation is listed as librarian in North Dakota and Washington D.C.

There could be descendants with Deo. He was born in 1892 and died in 1986. In 1915, he is married and living in Iowa, but by 1917, when he registered for the draft, he was living in Kila Montana. In 1930, he is in Wenatchee, WA, working in a dairy. He has one son, Blinn. The 1942 draft has him still living in Wenatchee, and working for the State Department of Agriculture in Olympia.

1942 WWII enlistment records have Blinn Webster, born in 1920, joining the Air Corps as a private. He enlisted in Seattle and was a single man, employed as a machinist. I could not find any death records for him, so he could still be alive...but I could not find any living records either, though I did find two living people with that name, both living in Washington State.

Sadly, I found an article on the 176th Wing of the Alaska Air National guard that had a Captain Blinn Webster killed in a mid-air collision in April of 1956. I am not certain this is "the" Blinn Webster, but we do know "our" Blinn enlisted in the WWII air corps. At this time, I have no records showing whether he was married or had children, but I have a feeling that he may have been married and the two people with his name in Washington state could possibly be a son & grandson, so making them the grandson & great grandson of Susanna.
Posted by Far Side of Fifty at 4:14 AM