This photo is from blog reader Janice…she calls her project The Dyer Album.
She recently purchased a Cabinet Card Album and would like to find relatives if possible. Most of the Photos are Cabinet Cards and most of them are from the Columbus Ohio area. There are only a few clues. There are five photos that are marked with names. 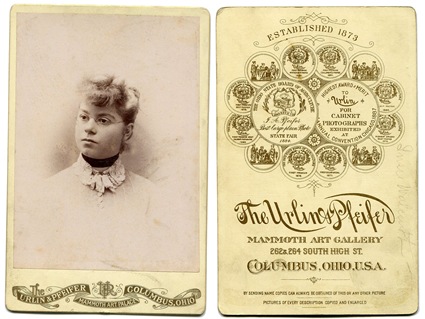 Urlin and Pfeifer of Columbus Ohio were the photographers. They had lots of awards..the latest being 1887..so this photo was taken sometime after that.  There is a name.


The best I can figure, this is Susie Walcutt listed in the 1900 US Census, living in Columbus City, Franklin, Ohio, born Jul 1873 to Robert and Priscilla Walcutt


Gustav Mohr (b. 1873 in Columbus, Ohio) at the age of 27, married Susie Walcutt (b. 1873 in Worthington, Ohio) on 17-Oct-1900 in Columbus, Franklin, Ohio. The parents were, Michael Mohr and (first name not given, nee) Ringhausen for the groom, and Robert Walcutt and Priscella (nee) Baker for the bride.


I'm currently working the theory that her name is Susie Walcutt b. Jul 1873 to Robert and Priscilla. I've found her on the 1880 census at Perry, Franklin, Ohio and on the 1900 census at Columbus, Franklin, Ohio. If this is her I may have found a lead to a relative in an old Bible posting. A Larry Evan Walcutt shared details from a family Bible that was given to him by Susie. I have my fingers crossed that this is she, and that he replies to my email. Even so, I still don't know if the rest of the images are related to her.