This is another photo that is from the Antique Mall in Detroit Lakes, Minnesota. 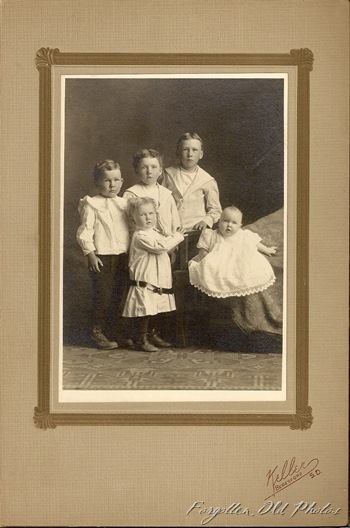 Five cute little kids..most of which break all the hair rules.  The rule is usually..girls part their hair down the middle and boys part their hair on the side.  Perhaps this Mom never heard of the “hair rules.”  I think they are mostly boys..but the baby could be a girl. I also see red hair..especially on the child with the very curly hair… who could also be a girl.

These photos are marked Elmer Westling..Elmer had no children..so obviously Elmer knew these children.

Elmer’s sister Selma Mary married Frank Duball. They lived in South Dakota. They had a whole bunch of children..and the oldest five match the line up pretty well.

Napoleon (Polie) Paul Dubrall  Hair parted in the middle yet he looks boyish.
Marie Aileen Dubrall  Hair parted in the middle but looks girlish.
Francis Henry Dubrall born in 1909  Hair parted on the side (a boy) but with a feminine shirt..I believe it even has polka dots on it!  But if you have one older sister perhaps you would wear a hand me down shirt.
Vernice Elmer Dubrall born in 1911 It is hard to tell where this little ones hair is parted.
Blanche Louise Eleanor Dubrall  The baby.

It is totally speculation on my part that these are relatives of Elmers. Tomorrow I have a photo of Elmer’s sisters…possibly the mother to these children.

I would like to date this photo as being taken right around 1910-1915. ( After finding the Dubrall children I would say 1913) Keller was the photographer at Beresford, S.D.


I took my info from Genealogydotcom..the census is probably a more reliable source.  We would then move the date of the photo to 1918:)
Posted by Far Side of Fifty at 4:19 AM