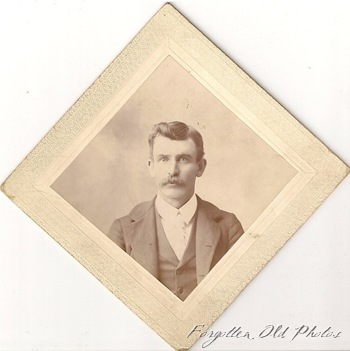 This is another of those on the diagonal photos.  This is Harry Talbert.

This photo was purchased at the Antique Mall in Detroit Lakes, Minnesota.

Update on Diagonal Cards:
From Brett Payne
This style of card mount is very similar to those which were used for either the Pocket Kodak camera, produced from 1895, or the early Kodak Brownie series, produced from about 1900 onwards. I estimate a date of around 1895-1905 for this particular example.
Posted by Far Side of Fifty at 4:52 AM