Well, this week lets look at a category that I made up.  Children in chairs. The photos that have me saying..oh my I hope they didn’t fall. 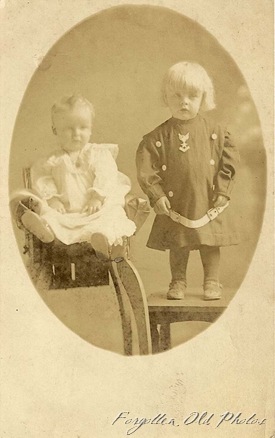 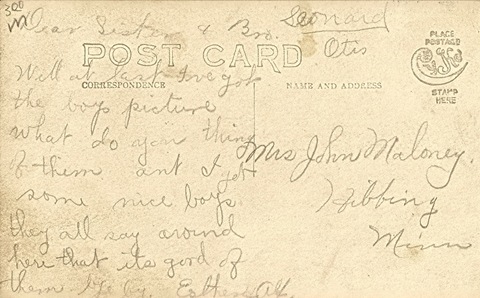 Thanks for stopping by, do come again:)
Update from Abra:
These cute children are Leonard and Otis Gunderson, the first two children of Alfred and Esther (Forcier) Gunderson. The Gundersons had a dozen children in all, if I counted correctly. Mrs John Maloney was Esther's older sister, Mary Forcier. Esther & Alfred were married 9-15-1909. Leonard was born 4-16-1910 and Otis 9-7-1911. With that information, I would guess this photo is from 1912. The Gundersons and Forciers lived in Renville and Kandiyohi counties, very close to the county I live. Leonard and Otis married women with the same last name (possibly sisters--didn't search that far). Leonard died young (1957), while Otis died in 1978. There are many living relatives, and I will look for one of Leonard's or Otis' children/grandchildren to connect. Should be pretty easy; I just need more time in a day! (BTW, Esther's sister, Mary Maloney, moved around a bit after their marriage in 1905, but were settled near the rest of the family in Kandiyohi county by 1930).
Posted by Far Side of Fifty at 5:27 AM