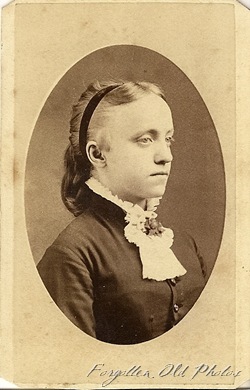 This is a CdV from 1876 to 1880.   She has a hair band on to keep the short bangs in place, I find it curious that the hair in front of her ear seems clipped.  I believe that you can see the corset lines in the front of the dress/blouse.  She is also wearing a jabot, which is is described as being a pleated, ruffled or lace trimmed frill. There is also something right in the center of that jabot..some kind of big button or broach. 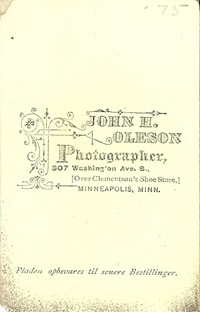 The back of this card is the same as yesterdays.  I got these cards in the same Antique Shop.
Thanks for stopping by, do come again:)

Update from Norkio:
Now this girl is the younger of the two, I would guess between 15-20 years old. Yes, that's the top of her corset that you see - the lines over her bosom. My thought here is that she probably has bangs that go down to her ears, but for some reason she decided to pull the bangs away from her face. Maybe her mom insisted? Bangs were popular for younger girls. There's a section of a Laura Ingalls book all about the cutting of her bangs and how she used her slate pencil to curl the bangs. I think the book is In The Big City? This would have occurred around the same time that these photos were taken. I notice that her hair is also somewhat loose in the back, which also speaks to her younger age.
Posted by Far Side of Fifty at 5:57 AM