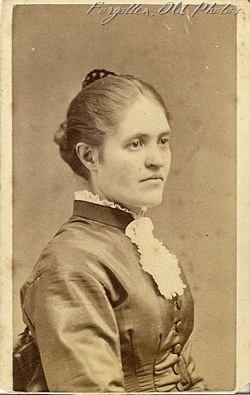 This is another CdV.  This one was most likely taken 1876 to 1880.  I think I may have a relative of hers tomorrow..a sister maybe. They are wearing just about the same style dress, but with different jabots and their hair is done differently.  This gal has something in her hair, I am not certain if it is a hair clip or something crocheted. She looks far away in thought. 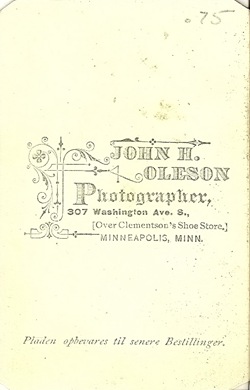 John H. Oleson was at this address over the Clementson’s Shoe Store from 1876 to 1880.  He was from Norway, he died in 1881 and his wife Anna G. took over his business for eight years until she remarried.
The sentence at the bottom appears to be Danish ..at least that is how Google translated it. It translates : Plate is stored for later reservation.  I find it curious why this was in Danish instead of Norwegian..perhaps most of his customers were Danes.
I got this CdV at an Antique shop in Dorset, Minnesota..it was seventy-five cents.
Thanks for stopping by, do come again:)

Update from Norkio on the hair adornment!
That little bit you see in her hair is a mantilla comb. They were very popular and used on a chignon or other twist. The teeth are about 1/4" wide, tapering to about 1/8" at the tip. There are usually 5-8 teeth on the comb and they are between 2 1/2" to 3 1/2" long. Some women wore them "side on" like in this photo so you'd see the decoration from the side; other women wore them "front on" so that you would see the decoration peeping up over the crown of their head.
Posted by Far Side of Fifty at 5:43 AM