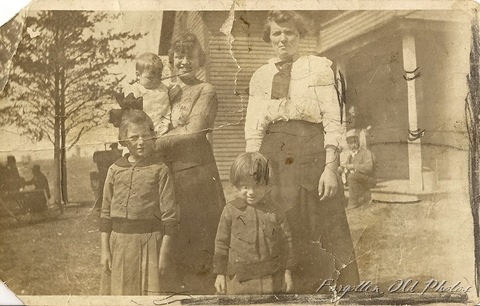 Do you suppose that the little guy in the front was a budding artist? 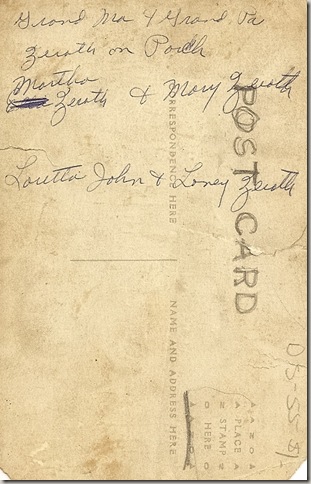 This is another Azo Real Photo Postcard from the years 1904 to 1918.
Grand Ma and Grand Pa ( He is sitting and she is behind him wearing a white apron)
Zerath on the porch
Martha Zerath and Mary Zerath
Loretta John and Lovey( Louey ?) Zerath
I almost didn’t buy this postcard, I got it from an Antique shop over by Hackensack, MN.  Then I figured if some child went to the trouble of enhancing this photo..at least I could purchase and feature it.
Thanks for stopping by, do come again:)

Update from Iggy!
Martha, Loretta, John, and Louie Zeroth all living in the early 1900's in Stearns, MN. It appears many of them died young around 1923 (perhaps an accident or weather calamity?) In any event, there are no SSN records to be had.

I suspect a grandchild or two of Loretta "is out there".
Posted by Far Side of Fifty at 5:25 AM