Oh, I love sending photos off in the mail and hearing stories about the people in the photos!  I sent off six photos..the ones I called Mothers Bros.  I got these photos at an Antique Shop near Dorset, Minnesota. 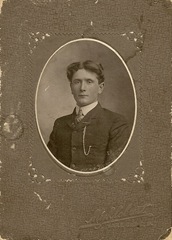 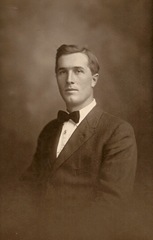 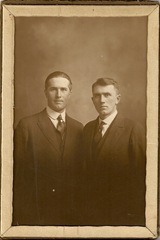 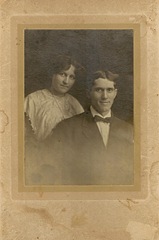 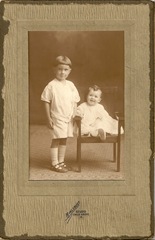 I mailed the photos to Monroe’s daughter Nina. I received these emails from her along with a story!

I did receive your e-mail.  I'm late in getting back to you because  I've been doing some investigating into our family history.  Our family would love to  have the pictures. I called my sister this morning to ask if Grandpa Newcomb had a sister and if she  lived in Minn.  She remembers visiting a lady in Alexander, Minn, when she was quite young
(1940's). We're not sure if she was a sister.

Grandpa came from strict Victorian family.  My sister has a wedding picture of Monroe (his father and mother) .

Ed and Edna had four children Monroe, Norma, twins  Donald and Dorothy.  He farmed with his sons south west of Eagle Grove, Iowa.  He had a great work ethic and we learned it well as we grew up on the farm.  One story I love to tell
that involved my dad and grandfather happened in the early '50's.  Homer and Sylvia  grandchildren, Larry and Joan Mehl,
we visiting for the summer.  They lived only a quarter mile from  us.  It had been a rainy spring and the creek near-by was over it's banks.  There was a rope bridge and guess what?  We decided to check it out.

My dad and grandpa were putting up fence and saw us with the help of  a younger cousin, who was not invited.  Grandpa thought my dad should check it out.  We  reached the bridge and the water was running and was quite high.  The older kids went to cross, but we younger ones stayed away.  It was probably a good idea because we saw dad standing behind a tree with a willow switch in his hand.  We could see we were in trouble so we headed for the house.  My sister, Linda was short and could not run as fast, so guess who felt the switch
the most.  What did we learn?

We learned to ask and to let someone know where we were off to.  We had to eat dinner with our younger cousin and if looks could kill.  Ha.

We have many stories.  Thank you so much for sending the pictures.


Take care and have a wonderful day.

Hi Connie,  I received the photos today.  Thank you so much.  I have shared the story of you
finding these photos with many of my friends and relatives.  They have found the story pretty
amazing.  My husband, Tom, will scan these and share them with family.  There was another
brother George who was a policeman in Eagle Grove.  I'm still finding out who else was in the
family.  I'll send you a e-mail if I do.  Thanks again.  Nina

Thanks to Iggy for his assistance in the research that made this Full Circle possible!  Thanks for stopping by, do come again:)