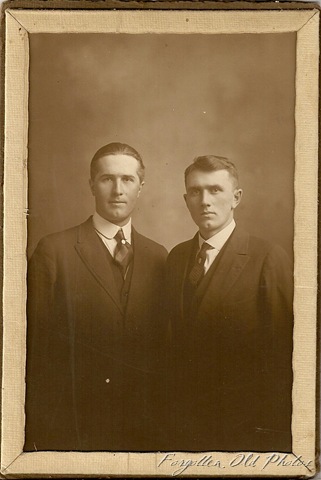 This is Homer and Frank Newcombe.  Underneath the flap of this folder the photographer is identified as Myklebust. 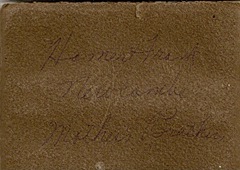 In the 1920 Census of Wright County, Iowa  Frank was the head of the household..Homer and his wife Silvia and his Mother Mrs. Lillian Newcombe lived with him.  He was 26 that year and was a farmer.  He was born October 03, 1893 and he died July 01, 1966.  So that would have made him about 73 when he died.
So far the birth order of these Newcombe boys is Jess (1887)  Homer (1890) and Frank (1893) and we will meet another Bro tomorrow.
Thanks for stopping by, do come again:)
Update: Thanks Iggy!
Frank D Newcomb served in WWI .  His father was Monroe Newcomb.
Frank died in Eagle Grove, Wright County, Iowa.


Update December 26, 2011
Homer was my Grandfather. My mother, Leora, was his only child. I am one of his three grandchildren..& yes, he was a very handsome man. I grew up on Grama (Sylvia) & Grampa's farm with my brother,Larry. Grampa was one of 9 children...5 boys & 4 girls. I knew my uncle Frank very well as he had a neighboring farm...& he & Grampa were very close as brothers.These pictures probably came thru Grampa's sisters families..as the brothers all lived on farms in the Eagle Grove, IA area until they passed on. I would love to hear from any of the Newcomb family.
Iowa Farm Girl (www.gramasbestbuddy.blogspot.com)