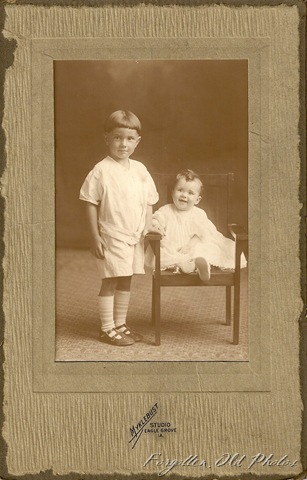 These are the children from the couple yesterday.  IF the couple yesterday is Edwin and Edna (Woods) Newcomb then these children are Monroe and Norma or Dorothy or Don.  I will assume it is Monroe and Norma, since usually the oldest child is named for someone.  If you recall Monroe was the father of all the Mothers Brothers boys ( Jess, Homer, Frank and Ed) ..so this little boy was named after his Grandfather. 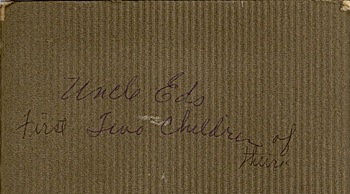 Monroe was born January 06,1917 and died January 03, 2007.  His wife Gladys died in 2008.
Mrs. Norma Gayle Newcomb Ringer, age 87, of Davidson, died Tuesday April 3, 2007. Born November 27, 1919, in Eagle Grove, Iowa, she was a daughter of the late Edwin Newcomb and Edna Wood Newcomb. She was preceded in death by her brother, Monroe Newcomb.
Among the survivors are her brother, Donald Newcomb and her sister, Dorothy Helgevold.
This photo was probably taken in 1920 or 1921.
I am waiting patiently for my phone call to be returned…The big questions I have about these photos are..Who was the Sister of all these brothers in this series?  How did the photos come to be in Minnesota? There seem to be many relatives still in Iowa.  Iggy found a newspaper article that was written about the  Monroe Newcomb family (The little boy in the photo above) they were all together baking their grandmothers favorite recipes at Christmas time..so I cannot imagine them not wanting these photographs.
Today I am back using Windows Live Writer..Nancy can you “bigify” the photos okay?  It was an easy fix to that dilemma..thanks Iggy..you have been ever so helpful!
Thanks for stopping by, do come again:)

Update: Friday August 27, 2010 The little boy in this photograph, had a number of children..the photos will be on their way to Carroll, Iowa to Nina very soon...I will write a Full Circle post when she has received them.  Many Thanks to Iggy for the assistance with this search! :)
Posted by Far Side of Fifty at 6:12 AM