This is the first in a series of photo that I will call “Mothers Brothers”. I got them all at an Antique Shop near Dorset, Minnesota.  There are six photos in this series.
Most of these photos have been taken by a fellow by the name of Myklebust.  He came to Eagle Grove Iowa from Norway and established a photo studio.  He was adventurous and returned to Norway on photo expeditions where he would take photos of Norway’s residents and the scenery and sell them to people back in the USA.  He also was well known for making stereo photographic images. 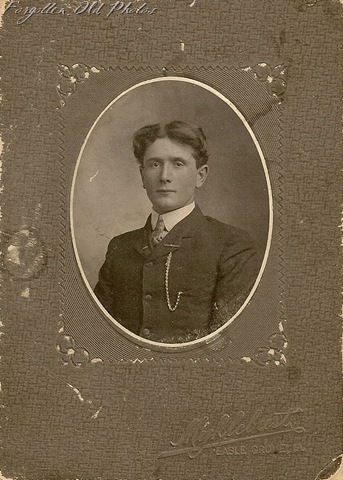 Anyway here is the photo, it is Jess Newcombe, “Mothers Bro”  In the 1920 Census I found that he was 33 and single and a farmer living in Wright County, Iowa.  He was born about 1887.

On side note,  yesterdays photo will be on it’s way to relatives on Monday!  You may want to check out yesterdays post to catch up.
I also received a comment from another relative of Alice Lomoe’s who was  featured in  Photo Number 172 and Full Circle Number Six.
Thanks for stopping by, do come again:)
Update from Iggy:
He is Find A Grave Memorial# 125740984.His sister, Ida Elizabeth Newcomb Wernet is Find A Grave Memorial# 132336171
Posted by Far Side of Fifty at 9:37 AM