Today I have two photos of Homer Newcombe.  I would guess that only a year or two separate these photos. 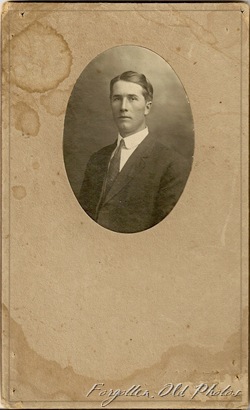 It has been pinned or nailed up somewhere for someone to gaze upon.  Myklebust  in Eagle Grove Iowa was the photographer. 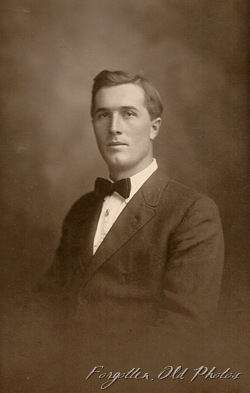 Here he is a few years later, he must have switched barbers..his hair is parted on the opposite side now.

According to the 1920 Census in Wright County, Iowa  Homer age 29 was living with his wife Silvia who was 19, his Mother, Mrs. Louise Newcombe who is 63 and widowed and his younger brother Frank who is the head of the household.
Homer was born May 24, 1890 and he died October 01, 1972 in Arizona.   So he lived to be eighty-two years old. Both of these photos were probably taken around 1910 to 1915.
He was Mothers Bro..so Homer joins Jess from yesterday. Tomorrow we will add another Bro.
Thanks for stopping by, do come again:)

Update: Thanks to Iggy we have the following info.
1930: Homer and his brother Jess were both found in the 1930 Census in Wright County.