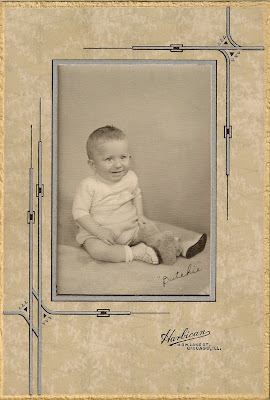 This is "Butchie" I wonder what his real name was.  I had an Uncle Butch his real name was Clarence..my Father is the only one that called him Clarence.  Years ago Butch was a common nickname sometimes separating a Sr. from a Jr. with the Jr. nicknamed Butch or Butchie.  Butch was also a type of  haircut in the 1950's  but when this little boy was nicknamed Butchie it probably meant that he was a tough or rugged little boy. I will guess that this photo was taken in 1940-1941.

I could find no information on the Harbican Photo Studio in Chicago.   This photo is a little different, it has almost a basketweave looking texture..the dots that make up the photo are very squarish.

I have no idea why someone would take their child in for a photo sitting and not polish his white shoes white.  I fixed them in photoshop..they were disgraceful. I can remember polishing my siblings shoes in the car, on a towel while my Mother was driving to town.  The toes being so worn from the child continually crawling around on the floor before they could walk, that you had to polish the toes several times:)