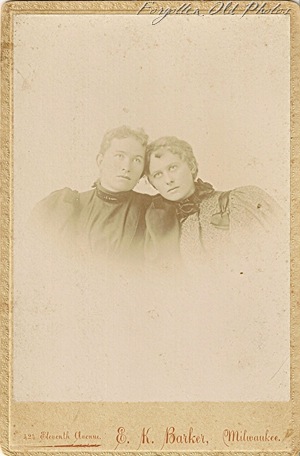 Do you recognize Josephine? ( Josephine Frendenberg Guhr or Mrs. Ernst Guhr II)   She is on the right..now who is the gal with her in this photo..a sister..a cousin..a friend? This looks very 1895 ish to me..with the huge “leg of mutton sleeves” since we know that she (Josephine) was married on December 21, 1895..this could have been taken right around that time. I so want to see the rest of those dresses… 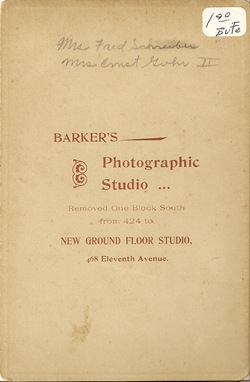 Now we have another name..Mrs. Fred Schreiber ( hopefully it is spelled correctly..it looks like part of it was erased and corrected). This is a cabinet card.

Update from Iggy!
Hold the presses - I found a marriage record for Frederic Scheiber of Greenfield, Milwaukee marrying Bertha Freudenberg (parents Charles and Amalie) on 21-Sep-1889 in Milwaukee, WI.

How sad. In the 1920 census, Bertha is shown as living with the "in-laws" and divorced.

So these are sisters..Bertha and Josephine..their Mother must have really enjoyed this photo!:)

This photo is headed to Josephine's Great Grandson Ed on December 20, 2010:)