This is a photo that I purchased at the Antique Shop in Royalton, Minnesota last summer. It was damaged.  Which is not surprising because that Antique Shop is an adventure in itself.  It was raining, and the roof was leaking and they had placed pots all over to catch the worst of the drips.  The shop was located in a very old very tall two story building.  I am sure that the second floor was entirely soaked..I was sure that the roof was going to come down any moment…but I escaped with a few photos instead! 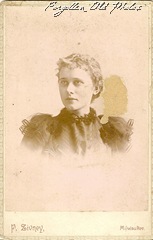 Anyway..I fixed the photo in Photoshop. 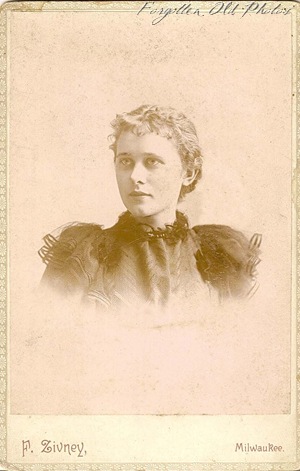 The photo was taken by Frank Zivney in Milwaukee.  He was at 211 State Street in 1889 so that is the date we will use for this photo. 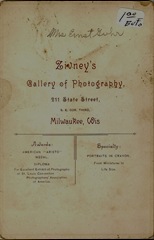 I darkened this up a bit so you can see that it is marked.  Mrs Ernst Guhr.  Tomorrows photo says that she is Mrs Ernst Guhr II and I will assume that is true.   Her husbands parents were most likely Ernst G. Guhr born in Germany August 07 1848 and Ottilie Marie Bass Guhr born August 04, 1849 and died in 1919.  I hope we find out her name..

I thought at first this might have been Ottilie..but this gal is only about 20 years old.  If the photo was taken in 1889..then she was born sometime around 1869.  ( I just cannot make her forty years old in this photo..can you?)  This is a cabinet card.


Iggy added: The first child's name was Evelyn and she was born about 1897.
Guhr, Ernst C. and Josephine F. were married 21 Dec 1895 in Milwaukee, Wisconsin.


Update: Iggy has found a descendant of Josephines..through her oldest daughter Evelyn and Evelyns husband Ed..we will wait to see what happens next! :)


This photo is headed to Josephines Great Grandson Ed on December 20, 2010 :)


Correction:
The following posted by Intense Guy is a bit in error. "Robert Guhr worked for South Milwaukee Brick Company, South Milwaukee, WI (1922) with his dad "EC" and then later lived in Rolling Meadows, IL where he was an Engine Watchman for the Chicago & NW Railway (1951-1957) just before he died in 1958."

More Correctly: Robert Guhr worked for South Milwaukee Brick Company, South Milwaukee, WI (1922) with his dad "EC" and then later lived in Aurora, IL working for the Aurora Well Works; then: Chicago, Wilmette, Winnetka & Deerfield, IL while working as the Purchasing Agent for the Powers Regulator Co. He died in 1958. He never lived in Rolling Meadows, IL.


More info From Anonymous:
No apologies necessary! "EC" (though I never heard him called "EC") was my Grandfather and Robert was my Father. Naturally, Josephine was my Grandmother. The brick and tile business was originally located in Muskego, WI, moving to South Milwaukee when raw materials became scarce. The South Milwaukee operation eventually failed but during this period "EC" also held a job with a Milwaukee candy company. Josephine insisted he keep this job just in case the brick company didn't make it, proving she had a good head on her shoulders. Josephine died on 12/15/1956 and "EC" died on 2/4/1957.


I mailed a CD copy to Bob in November of 2011. He shared the following information with me.
ERNST GOTTLIEB GUHR was born in GermanyAug. 7, 1848, and is a son of Gottlieb and Dorthea (Stahr) Guhr, natives of the same country, the former, born Dec. 19, 1819, died Feb. 13, 1883, and the latter, born May 2, 1819, died March 31, 1897. The family immigrated to the United States, landing in Baltimore. Md. on July 11, 1863, and coming directly from that point to Milwaukee. After a stay of four weeks in the city they purchased a farm of 80 acres in the town of Muskego, which was the home of the parents for the remainder of their lives. Of the four children in the family, two are living: the two older ones, Dorthea and Anna, being deceased. Ernst Gottlieb is the third and the only son; Caroline, the youngest, is the wife of Charles Beilfuss and resides in the village of Waterford, Racine County. Ernst, a lad of fifteen when he accompanied his parents to this country, obtained all of his schooling in his native land and after reaching his new home employed himself on the farm, assisting his father. In 1873 he purchased the place and is still cultivating the soil, taking care of a dairy herd of 14 cows and patronizing the creamery at Cold Spring. In 1885 a tile factory was started on the farm, making at first both brick and file, but more recently confining the output of the factory to the last named. Mr. Guhr supplies all the local demand, his being the only factory of the kind in the vicinity. In July, 1873, Mr. Guhr was married to Miss Ottlie Bass, a native of Milwaukee, born Aug. 4. 1840, the daughter of Charles Bass, who later moved to Muskego, where both he and his wife died. To the marriage four children were born. Ernst, born in May 1874, received his preliminary education at the district school, and then attended school for two years at Valparaiso. Ind. and later learning the machinist's trade. He married Josephine Freudenburg (Mrs. Ernst Guhr II) by whom he has five children (Evelyn, Robert, Ernest, Florence & Herbert), and is at present living in Milwaukee, being the machinist at the Johnson Candy factory. Emma, born Dec. 2. 1876, was educated in the home school and is married to Edward Wolmer; they also have five children and their home is in Muskego township. Delia, born in 1878, is unmarried and resides with her father's family. She is a graduate of the Milwaukee Conservatory of Music, and teaches that art in the community. Delia was killed in a railroad grade crossing accident in 1937. George, born Dec. 25, 1884, is also a member of the home circle and assists his father in the work and management of the farm. Mr. Guhr is a Republican, has served as side supervisor for three terms and as chairman of the county board for one term. The tile factory is estimated to be worth $12,000, and will probably be of greater importance in the manufacturing development of the county as the years bring better shipping facilities. The deposit of the pure lacustrine clays suitable for manufacturing purposes that is found in this part of the county is an interesting geological fact that is mentioned in the main history of this work. (This was probably written ca. 1907 – 1910 with later information added by me.)
Posted by Far Side of Fifty at 4:42 AM