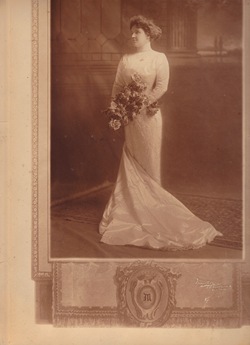 Photo Number 383 now has a name “Nellie”
This is a photo that blog reader Joan from North Carolina found behind another photo in a second hand shop. Iggy was instrumental in finding a connection.  I forwarded the information onto Joan..and the photo was returned to family!
Joan shared this with me:
I wanted to let you know that Mike Schofield emailed me this morning and said he and his family believe the photo is of Nellie Vetter, who married Leopold Vilsack in 1895.  The Schofield family is descended through Pauline..who was one of Nellies daughters.    Happy ending! ( Mike is a Great Grandson of Nellie)
This is the research info:

Joseph G Vilsack's brother, Leopold W Vilsack was born in Pittsburgh February 6 1872. Mr Vilsack is a jeweler by trade and was in the jewelry business in Fifth Avenue, New York for 18 years starting in 1893. His early education was obtained at St Augustine's parochial school of Pittsburgh and in Holy Cross College. He then served an apprenticeship at his trade after which he went into business. He married Nellie M Vetter, daughter of John Vetter and wife on October 6, 1895. Their children are Leo (b. Jul 1896), Virginia (b. Feb 1898), Pauline, Mercedes (1903-2000) and Robert.
William J. Schofield Jr. (b. Feb 1898) and Pauline Vilsack married. Mercedes does not appear to have married.


Yes,  indeed another photo found it’s way home!  Thanks to Pam for sharing this old photo and to Iggy for his sleuthing skills!


Thanks for stopping by, do come again:)

September 12, 2012 Update From Patricia:
Thank you for posting the photo of Nellie Vetter Vilsack, my great grandmother. Daughter Virginia was my grandmother; Nellie had a fourth daughter, Genevieve. A small correction: Leopold Vilsack was a jeweler on Fifth Avenue in Pittsburgh, not New York.