Today's photos are a group of very interesting photographs.  A fellow by the name of John who also has a blog called Things ‘aint what they used to be  contacted me by email.
He had two photos he wanted me to look at. 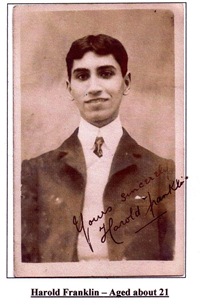 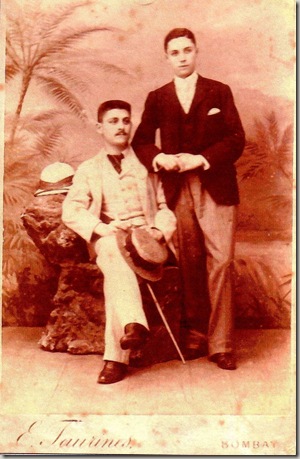 Harold is in the second photograph…but which young man is he? The one on the left or the one on the right? Please venture a guess.  Harold is Johns Great Uncle. The first photo was taken in 1906 –1908 sometime..the second photos date is unknown..I will guess that it is from around 1910 to 1915. 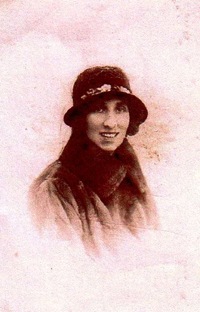 This is Johns Grandmother Nellie..she is Harold's sister.
This is the information that John shared with me:
Harold was born in Surat, India in 1888 - his sister was my Grandmother Nellie Grace Franklin (wife of my father's father) who was also born in Surat, in 1884. Harold's sister came to England when she was 11 and Harold followed later - he was in the Hussars (a boy soldier) and went to military schools in India (Surat is near to Bombay?).
He appears in the 1901 and 1911 UK Census - in the latter he lived with an Ernest Hobbs in London and Harold was shown as an actor employed by the Garrick Theatre!
I have a poignant and tragic letter, written in pencil to his sister, from a trench somewhere in France during the 1st World War (1916) - he writes that a lot of his colleagues have been killed around him as well as his senior officer, leaving him in charge.
He survived the war, although injured, and then (as far as I can see) followed a life as a traveling actor, mainly in South Africa - I used to have his wooden portmanteau (case) with loads of Theatre and Railway labels stuck on the inside lid - unfortunately it was infested with woodworm and, before I had since realized the importance of relics from the past, it was destroyed!
I have attached two photos of postcards sent by Harold from Durban ....Harold disappeared after that - I am unable to find any record of his death and, therefore, am intrigued. 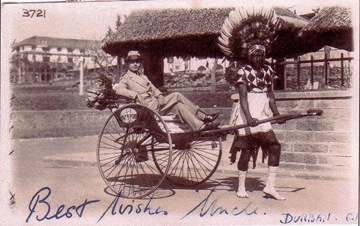 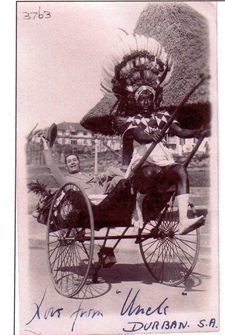 Harold looks as if he was having a grand time in South Africa!
John also writes: The last date I knew him to be alive would be about (1929?)  - He certainly was an adventurous sort!
Today’s entry is a little backwards..we usually search for relatives to place the photo with..this time we search for a person..if anyone knows what happened to Harold Franklin..you can contact me through the email on my profile or leave John a message at his blog. All the photos will enlarge if you click on them!
Thanks John for sharing your very interesting old photos!
Thanks for stopping by, do come again:)
Posted by Far Side of Fifty at 4:08 AM