Recently I heard from a fellow by the name of Jim..he wrote:

I was intrigued..about the photo and about the sale.. I asked him where Brimfield was located..

I bought this photo at the Brimfield Antique show in May.  It's an amazing show in Western Massachusetts.  It's a week long, three times each summer.  It's a mile long and extends about 500 yards on either side of the road.  I bought a bunch of old photos from Oxford Women's College (which became part of Miami University in about 1907 or so.)  Some of them are simply amazing!

But this one came from an estate in Massachusetts.  I'm not sure what town.  The photo was damaged as you can see, but the notations on the back really made me want to buy this photo.  I figure it dates from about 1885 or so?  I notice that all the women are wearing similar carnation corsages..

The photo is on cardboard, attached to another piece of cardboard.  It may have been a large carte-de-visite type photo that was modified later.

I'm dying to know anything about who these women are!  I'd love to know what your readers think! 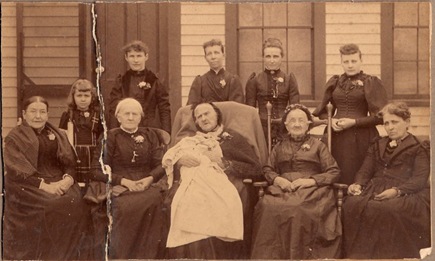 Just about anything is possible..I think it is from 1890 or maybe even 1900. The sleeves are somewhat poufy on the younger gals…none seem to be the “leg of mutton sleeves” of 1895..the gal in the back row way on the right has the biggest sleeve. There hair is all simple and pulled back like in the 1890’s.   It may have been Betsey’s 100th birthday in 1890 or  1900.  It was most certainly a special occasion. 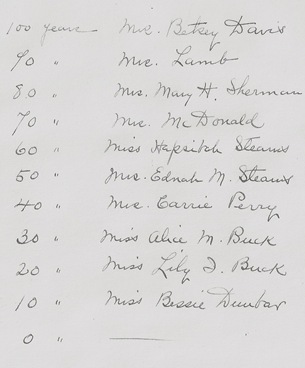 Jim would like to keep the original photo and have it restored.  He will share a copy of the photo with family members if any are found.

Here is the list as I read them..
Mrs. Betsey Davis


Miss Hapsibah Stearns b. 1833  Sister in Law to Ednah, Aunt of Alice and Lily Buck

Mrs. Ednah M. Stearns b. 1841 Sister in law to Hepsibah , Aunt of Alice and Lily Buck


Miss Alice M. Buck b.1862 Niece of Hepsibah and Ednah,  Cousin of Lily

Miss Lilly I. Buck b.1873 Niece of Hepsibah and Ednah, Cousin of Alice

I would guess that Hapsibah is really spelled Hepsibah..like in the Bible.   And the baby is not named…
Thanks Jim for sharing this unique photograph!

Thanks for stopping by, do come again:)
Update: This photo was probably taken in 1892.  I updated the people with their birthdates if they were discovered.  This is a very interesting group of ladies! :)


Update on December 20 2010  from Jim who is the owner of the photo.
I wrote to  the author and genealogist behind the the research that linked a lot of these women.  He replied to me with:

Then I heard from one of HIS kinswomen, who wrote:

I wasn't sure if you felt like updating the post!  It sounds to me that this photo is somewhat well-known, if it's showing up in local history books!

I ordered a copy of this book from Amazon, just for fun.
Thanks Jim for the update!! :)
Posted by Far Side of Fifty at 4:16 AM