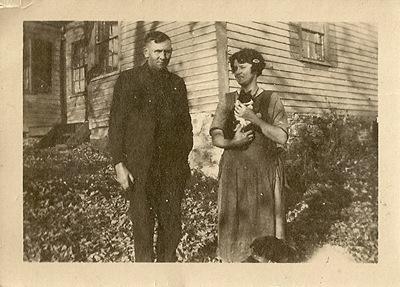 This is an old snapshot.. 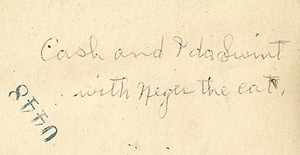 Cash and Ida Swint with Negir the cat.
The dog apparently was not important enough to mention. I am not quite sure on the date of this photo..1930’s? Interesting name..Cash..how many people do you suppose had that first name?
Thank you Pam for sharing all your photos with us!
Thanks for stopping by, do come again:)
Update from Abra:
The 1910 census lists  Ida Swint, a servant for Cassius & Ella Phelps in Williamstown, Berkshire, Massachusetts. Is it a coincidence, or, since the photo was found in this same area, is it plausible that this is the same Ida Swint as in the photo?

A theory I have is that Ida is pictured with either Cassius Jr or Cassius Sr. Is it possible the owner of the photo labeled it in such a manner as thinking those viewing it would automatically know who Cash was but needed to identify Ida? If this is the case, it would have been more clear if it was written 'Cash with Ida Swint and Niger the cat.' Does that make sense?

I was also theorizing that perhaps the cat is a gift from Cassius/Cash Phelps to the servant Ida, thus the importance of naming it in the photo. Note that Cash is dressed rather formally, while Ida is wearing an apron, which could be another indication of her servant status.
Posted by Far Side of Fifty at 4:07 AM