I have some Full Circles after wedding month is over!  I am always pleased when a photo reaches its “home.”
This Full Circle began with an email.

Jun 16
Hi! My maternal grandfather's family (Taylor) is from Detroit Lakes and my grandfather Edwin Taylor (1899 - 1998) had an older brother who was referred to as "Uncle Busty".  Could it be the same one? Jon 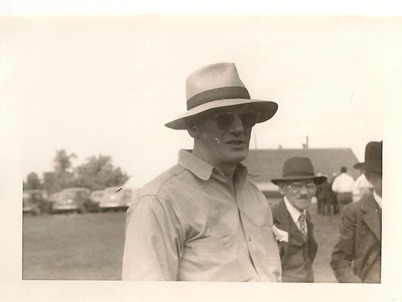 Photo Number 1280
Hi Jon, It could be!  The photo was purchased at a antique shop in Detroit Lakes MN.  Does he look like your Grandfather?  Sometimes the resemblance can be the clue?  I am happy to mail you the photo, I will need your address.  Connie at Forgotten Old Photos
You have a nice hobby!  It's tough to tell with the shades and hat in the photo but he does resemble my grandfather.
I mailed off the photo to California.
.
Hi to you, Connie,
I am putting in a little blurb about “Uncle Busty” for your blog and sending you a small contribution for your expenses.  Jon
“Uncle Busty”, as Busty Taylor was known by his family (two brothers and a sister), was kind of the clan’s black sheep.  Just below is an article from the local newspaper.
March 28, 1940 – An alienation of affections suit for $50,000 brought by C. Ernest Olson of St. Cloud, former Detroit Lakes resident, against W. L. Taylor of Detroit Lakes, drew to a close before a packed courtroom today. Seeking to recover damages, Olson has charged Taylor in the case with the alienation of the affections of his wife, Thelma Roberts of Detroit Lakes, prior to their divorce in October 1939.
Normally a divorce wouldn’t be big news but the packed courtroom says something!
Recently, a distant family member spoke to someone who related this tale:  Every time the local football team beat the Detroit Lakes team, Busty invited the entire team, plus girlfriends, out to dinner.  She (now in her 80’s) attended 3 or 4 such dinners.
Small world!
Thanks again,
Jon
Thanks for stopping by.
Jon asked me to add this request:
Could/would you please add this to my post?
If there are are any relatives of Busty Taylor is the Detroit Lakes, Frazee area, I would love to have a post from you.  Edwin and Howard moved to the Los Angeles area, where the former became an attorney and the latter worked in the television electronics field.  I recently received a phone call from a woman who was married to Grace’s grandson.
Also, if anyone knows what happened to Wilcox lumber, or if it is still in existence, I’d like to get some information on that, too.
Jon


Update from David:
I'm Busty Taylor's older grandson, David Cay Johnston. My brother Eric is his other grandson. I am also well aware of the facts discussed above. I met Edwin in the mid 1980s at his home in Pasadena, when I was an LATimes reporter, and interviewed him for several hours.Busty was William L. Taylor Jr. born 1891. He married Cora Morken (only grandparent I knew), born 1890. She went to Auburn (Minn) High. Cora's mother was a midwife and when she died the church was overflowing with people. Their only child, Gretchen, was born in 1914, several years after their wedding. Busty and Cora divorced after the trial, which was covered by some newspapers far away, one under the headline "Sin in the North Woods," if memory serves.Busty died in 1956 under what family lore holds be suspicious circumstances. I'm interested in learning more from others and exchanging information about the Taylors, Morkens, LeMayeaus and other relatives. My email is davidcay@me.com and my phone is 585-230-0558 (Rochester NY).