This week we will look at some ladies in hats. 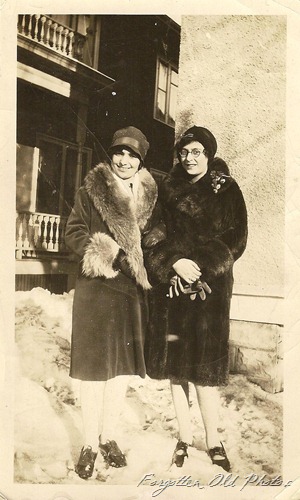 Two ladies in cloche hats and fur trimmed or fur coats.  Most likely from the late 1920’s and early 1930’s.  Fur coats were warm, durable and a sign of wealth or social status.

Rose Stone and Friend.
I paid a dollar for this snapshot at  the antique store in Brainerd Minnesota.
Thanks for stopping by.  Do come again:)

Update from Iggy:
Rose Rischall nee' Stone was born 27 Feb 1910 in Minnesota and died 4 Jul 1992 in Los Angeles, CA
The kicker? the house in the photo very closely matches the one in google street view for their home in 1930, 724 Hague Avenue, Saint Paul.

Further Update from Tina:
Rose Rischall (Stone being her maiden name) was my grandmother. Her father's name was not Morris, it was Issac. Rose was born in St. Paul Minnesota in 1910, and died in Los Angeles county California in 1992. The signature you have here, is a match to my grandmothers.

Rose's parents were Issac and Bessie and her siblings were Mildred and Walter according to the 1930 Census.