This is a photo from Craig’s Collection 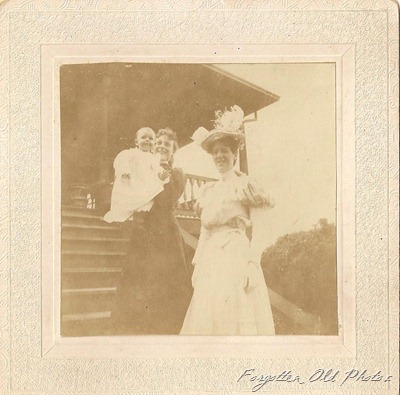 Celia + Adrianne Williams and Mrs Prescott  End of 1897
Thanks for stopping by.  Do come again:)

Info from Iggy:
Cecelia is the mother of Adrianne Williams. In 1930 they were living in Oakland, Alameda, California.

Adrianna's father, Robert Barker Williams (b. 14 Apr 1860 in Virgina) died 8 Apr 1929 and is interred in the San Francisco National Cemetery. He was a medical doctor that practiced homeopathic and other forms of alternative medicine. He died of heart disease. He was a Major in the US Army and served in Hawaii.His Find A Grave Memorial# 3546125.Celia F. Williams was b. 4 Apr 1874 and d. 23 Oct 1964 in Alameda County, CA. She is also buried in the National Cemetery.Adrianna was b. 8 Aug 1897 in Hawaii and died on 12 Feb 1978 in Alameda County, CA. In 1940, she was a Bacteriologist. She appears to have never married.There are 4-5 Mrs. Prescott's living in the Oakland, Alameda County area at the time of this photo - so its anyone's guess as to which one she was...
Posted by Far Side of Fifty at 4:05 AM