This week we will look at some of Craig’s Photos, he mailed them to me last spring.
This group of photos is all related.  Mainly they are two people through the years.  Emma and Hazel.
We will start at the beginning.  With Emma.  Todays photos are all CdVs that at one time must have been in an album. 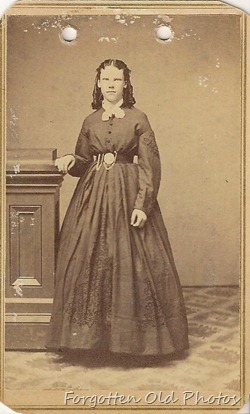 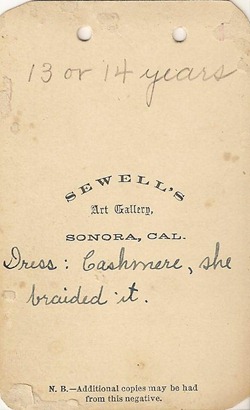 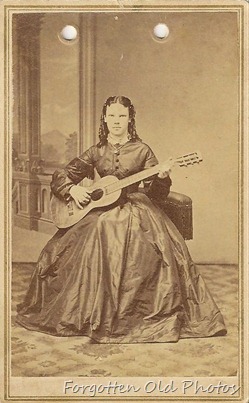 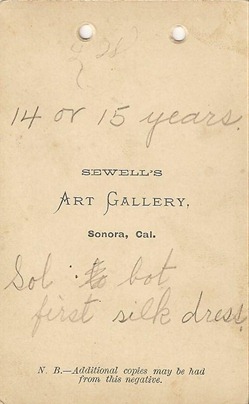 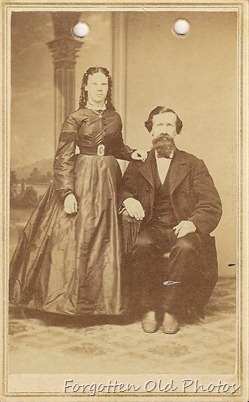 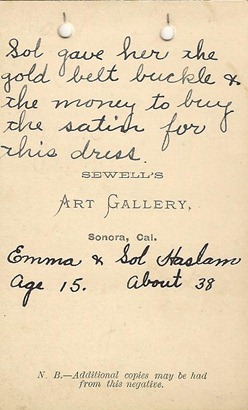 Sol gave her the gold belt buckle + the money to buy the satin for this dress.
Emma ( age 15) + Sol Haslam ( about 38)
This photo must be from about 1868.
Personally I don’t see much difference in her from year to year.  Her hair style stays the same as does the photographers studio..flooring, scenery and style of card.
Did she marry Sol Haslam ?  An older man..he is old enough to be her father.
Thanks for stopping by.  Do come again:)
Update: Solan Haslum was found in the 1870 census as a miner in Tuolumne County California.  He was 38 years old, born in Maine.  He lived with other miners including a WA Haslum who was 64 and born in Denmark.

I found some info on Sol.  He is buried in Tuolumne County in Columbia Cemetery.

Solomon's name is not on the marker, but he is buried with his brother, J. L. Haslam who died in 1886.The Haslam Brothers
Joseph Lee Haslam, Charles Haslam, and Solomon Haslam were from Waltham, Hancock County, Maine.
They came to Tuolumne County in the 1860s, and Joseph and Charles were farmers. Solomon was a miner.
Joseph Lee Haslam was born in 1831 in Maine. He married a lady by the name of Augusta who was also from Maine. In 1880, they had three living children, Nettie A., Mabel and Glenora.
Solomon Haslam was born in Maine about 1833. He married Anna R., and they had three children. Their children were Herbert, Clarence and Maude. Solomon passed away between 1886, when Maude was born, and 1888, when Anna remarried.
Charles Haslam was born about 1835 in Maine. He married a lady by the name of Hattie who was born in New Jersey to Irish parents. If they had children, none were alive in June 1880.

Since Solomon and his brother are buried together perhaps they died at the same time.

From Jacqi:
She lived in Fresno, and died in 1933, fortunately a copy of her obituary is retrievable on Ancestry.com from the Fresno Bee Republican on May 14. It lists two daughters, a son, a sister and a brother, all whom survived her. She evidently came to California from Maine when she was about ten years of age.