This photo found it’s way to Texas.  I am pleased that it went Full Circle! 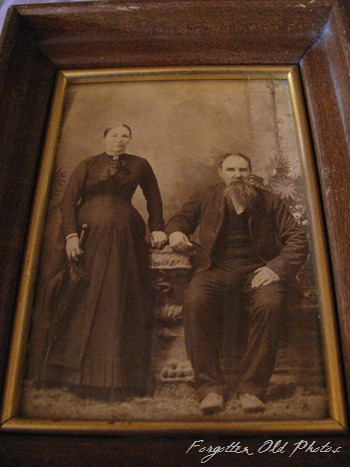 Photo Number 826
This photo was in a frame and I kept it all intact.
Mary found the photo and a mystery was solved.
Mary Wrote:
I received the picture you sent of Carrie and Ole Engebretson, my great great grandparents yesterday.  Once again thank you so much for the ‘labor of love’ you spend so much time and effort with.  I hope you get many letters of appreciation from others who have ‘found’ their ancestors through your efforts.  The picture is wonderful to have, and it won’t be ‘forgotten’ again.
Ole Engebretson was born in Voss, Hordaland, Norway on April 5, 1835.  Voss is located in the western mountains of Norway.  Carrie Brynildsdtr, his wife, was also born there on August 21, 1831.  Much of the information we have found on them and their family Much of the information we found on them was from baptism records.  The next generation back was Ingebrigt Olsen, Ole’s father and his mother Martha Eriksdr, who was born in 1778.  Ole Haldorsen born in 1755 who was Ingebrigt’s father, and Inger Knudsdr, his mother.  One generation further back was Haldor Ingebrigson, Ole Haldorsen’s father.  You can see how the names carried on from one generation to the next, and we soon realized that the ‘dtr’ or ‘dr’ at the end of the females names’ names meant daughter.
Ole and Carrie had two children while still living in Norway.  They are a puzzle we’re still looking for the answer to, as there is no mention of them on census records once the parents immigrated to the US in 1857.  They moved to Decorah, IA area and had five children while living there, including my great grandmother Martha Christine on March 4, 1858.  Their last three children were born in Medo, Blue Earth, MN starting in 1869 and the last born in 1873.
Martha Christine married Nels Tobias Hoverson in 1878, and they had five children all born in Medo. MN, including my grandfather Hilmer Hoverson, who was born in 1879.  The Hoverson family also originated in Norway.  Nels Tobias was the son of Hover Sibianson, thus became Hoverson (Hover’s son).  Once the families were in the US their last names remained the same from one generation to the next.
Again, many thanks for the rewarding work you do.  We didn’t even know Carrie’s first name, (which we’ve now found listed as Caroline, Caren, Kari and Kary), before we found their picture on your site.  You can see how just that bit of information has helped us to find out so much more.
Sincerely, Mary
She also wrote that she does not know where Carrie and Ole are buried..possibly Janesville, MN. but they have not located a listing for them there.
She also speaks very highly of  Salt Lake City, UT and the family research center in Temple Square.
Thanks for stopping by.  Do come again:)

Mary heard from another relative (Darla) who shared this:
In 1867, 7 wagons left Decorah (?) Iowa for Wisconsin. They were driven
by Ole Engebritson, Lars Severson, Peter Haug (e), Lars Falkadahl, Eli
or John Germo, Barney Oleson and Ingebrigt Oleson who according to my
grandmother was Ole's half brother. The cooked in a communal pot, hunted
game for food, the whole "pioneer" thing. After reaching WI, Albert, my
great grandfather, age 5, wondered off to check out the home stead and
was left behind. It must have been some time before they counted noses
and realized he was missing. They sent a rider back on horseback, where
he found Albert sitting on a rock, in tears. When the gang, who I call
the Medo 7, heard about land in Medo, they head there. I have no idea ;
how long they were in Wi, but since Martha Christina was the oldest, she
must have been born in Iowa. But where???? All we have for Albert is
Iowa.  Ole and Thron Hoverson, your other great grandfather, we movers
and shakers in Medo. Holding many positions (Ole was a postmaster)
while building the town. When my great grandmother Nettie came to
American  from Norway, she was working as a maid for Marshall Fields,
when she got a letter from her brother saying, "There is a family here
looking dfor a wife for their son, so get your ___ here ASAP." Ahh,
romance...aint it great.
Posted by Far Side of Fifty at 4:03 AM