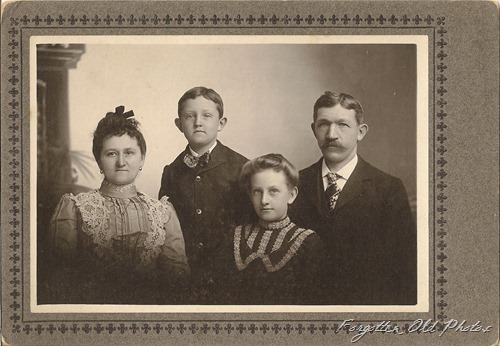 The photo is the size of a Cabinet Card. My guess is that this photo was taken around 1900. The gowns are trimmed beautifully in lace.

There are names on the back that are only visible when you turn the card toward the light.
Sphoie (Strange spelling ..perhaps they didn’t know how to spell Sophie.)
Will Richter
Cora
Elmer
Thanks for stopping by.  Do come again:)

Update from grandmavickiann:
1900 US Census:Sophia (Age 35) and William (Age 46) Richter living in Janesville, Wisconsin, with children Elmer (Age 7) and Cora (Age 9). The family also shows up in the same community in the 1905 Wisconsin State Census and the 1910 US Census.