The story continues.  We now know that Emma and Sol (Solomon) were married in about 1868.
We know that she came to California from Maine when she was ten years old..about 1863.
We continue to the next photograph. 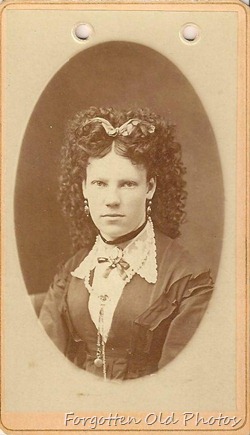 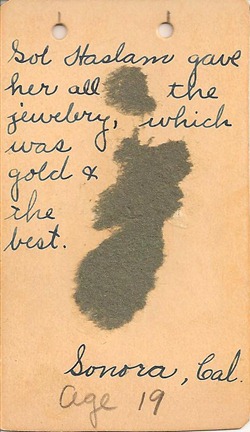 Sol Haslam gave her all the jewelry which was gold and the best.  Sonora Cal Age 19 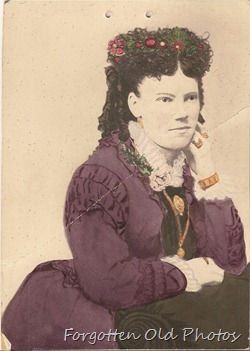 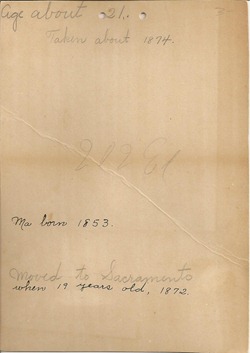 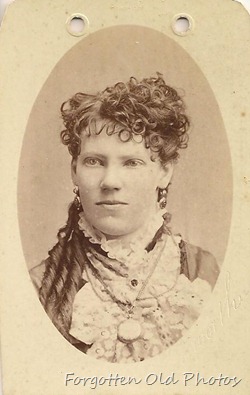 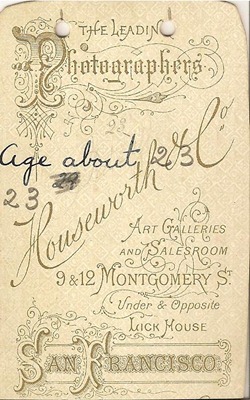 Age about 23 the year would have been  1876.
In the information I found about Solomon is correct ..he was married to an Anna R.  could it have been a clerks error..Anna ..Emma..they could sound alike?   Anna R. and Solomon had three children Herbert, Clarence and Maude who was born in 1886.  Sol would die sometime between 1886 when Maude was born and 1888 when Annie ( Emma ) would remarry.

Update: Anna and Emma were two different "wives" ..Emma may have been a kept woman..or a second wife I am not sure we will ever know for sure.

Update from Iggy:
Anna R. inherited the claim and the mine that Solomon owned - so Emma was either before Anna's marriage (or concurrent, as the Haslam family is associated with the Mormons). California would not have recognized a bigamous marriage (I don't think). Solomon died not long after his court cause filtered through the so-called justice system. He claims to have shot a man named Ruben Brooks in self-defense. Susan Ruben (his wife?) appealed the lower courts finding and a finding was overturned (not being a lawyer, I don't understand what exactly was overturned) This took place in 1885-6.
Posted by Far Side of Fifty at 4:02 AM