Page 24 of the Nettie Parks album. 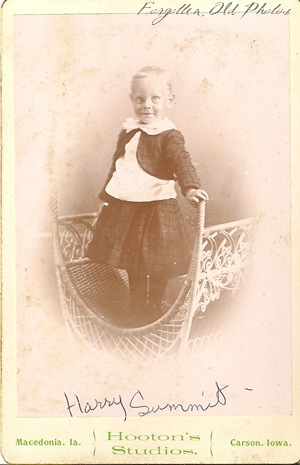 Little Harry Summit standing in a chair.  I wonder if he is related to Gilbert and Lueanna ( Lu Emma) Summit? We did not have any photos of them..but their photographs were in this album at one time..empty pages 10 and 11.

A reader by the name of Star asked this question:
How much did it cost to have these cabinet photos taken? How much would it have cost to have one's portrait painted by a various range of painters (local/naive, talented/unknown, known/famous)? What was the average yearly wage of a range of people shown in the photos? Obviously, photography made portraits available to a much wider range of people, while the cost of a lady's dress in a Sear's catalogue of the turn of the century continually pops back into my mind (if I'm not remembering incorrectly, it was something like $6!!!). I'd like to be able to put all these marvelous photos in perspective. Do you, or your readers, have some hard facts (and reliable sources) that will help me?


I responded that Tintypes were a penny a piece..they were the photograph that was readily available to everyday people and Tintypists were often traveling photographers in the late 1800’s.   Real Photo Postcards were a penny each in the early 1900’s, and they cost another penny to mail.

Does anyone know what a sitting fee was to have a cabinet card made, or the cost of the individual cards? Update: Iggy found an article that said that Cabinet Cards were about 6 dollars a dozen or 50 cents each.

He married Oliva Belle Wigginton (b. 1893 in Macedonia, Iowa) on 30 May 1917. At that time, his mother's name is given as Maud Rayburn. In the 1910 US census, Harry is shown living alone with with sister Alta and "widowed" Elizabeth Rayburn (b. abt 1833 in Illinois). Olive's parents were listed on the marriage record as Chas. W. Wigginton and Isadore E. Jackson.


Update January 04, 2012 from anonymous relative
yes, that is Harry Summitt, and more than likely the other is of Alta Jean Summitt (Loving). my Great Grandfather was Gilbert Summitt, and Harry would have been one of his sons. if anyone has any info on his sister Lena Summitt, it would be greatly appreciated.