Today we will begin an adventure.  I purchased an old photo album from Jerome’s  Antique Shop in Perham, Minnesota last spring. It is a beautiful old album..It had room for 32 photos inside..sadly it only had 19, but there were 23 other photos tucked in here and there. 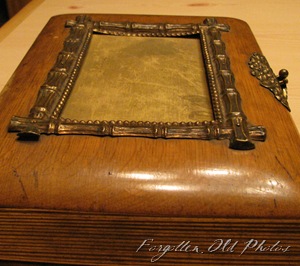 The front cover is made of wood, the pages have gold on the edges.  The metal bamboo frame on the front has a velvet background. 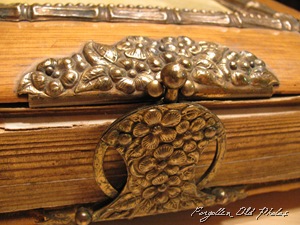 The clasp is beautifully ornate. 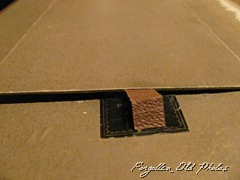 Inside the front cover is a tab..shall I lift it up? 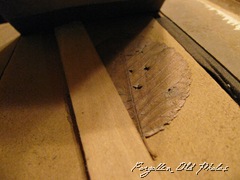 A leaf..I wonder how long it has been in here..I wonder what the occasion was..it looks like an Elm leaf to me.

Nettie Parks is the name on the page across from the first page. I know it looks like Nettie Parls here..but the back page has the name Nettie Parks written clearly.
Update:  Nettie L. Crandal married a Wesley Park on 13 Feb 1896. 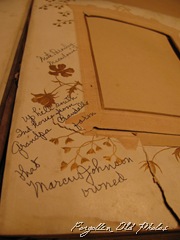 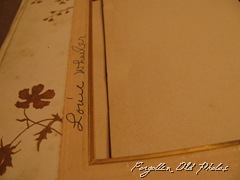 Louis A. Wheeler was a relative. :)

Mrs. Wheeler was primarily a housewife and mother. She purchased the business of making hairpieces, or switches as they were called from a lady who was retiring. She continued making switches and hair pieces for ladies in Red Oak and surrounding territory, in her home, until her death May 8, 1924. Amanda was the only one in this business at the time and the quality of her workmanship was well known. If at all possible, every lady brought her hair-combings to be made into a switch or hair piece. These were an important part of a ladies appearance.
Page 9 is blank. 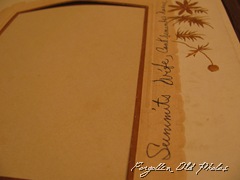 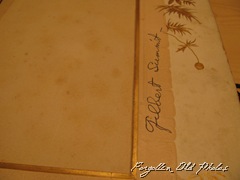 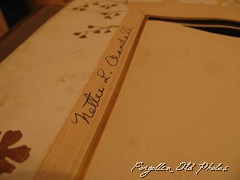 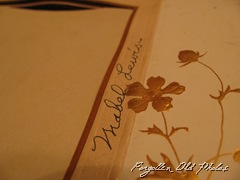 Page 16: Nettie L. Crandall on one side of the photo sleeve Mabel Lewis on the other side. 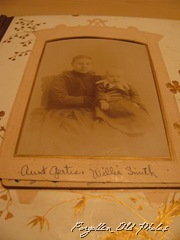 
Then she was either widowed or divorced and remarried. 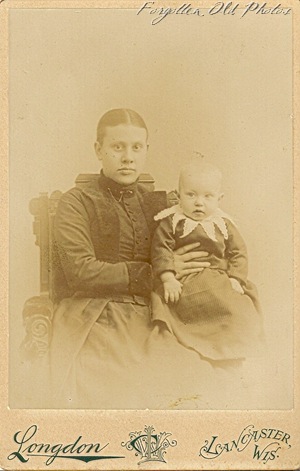 A cabinet card with rounded corners.  The photographer was Langdon of Lancaster, Wis.  I will date this photo about 1889 Gertie wears her hair in a bun with no fringes…her collar is high and her dress is simply adorned with only one piece of jewelry at the neck.. it appears to be a pin with a chain.  Little Willies collar is pretty cute..it is some kind of lace.

Thanks for stopping by..I hope you will continue on this adventure.  It will only be interrupted for Full Circle posts..there are six of them pending:)

Update From Iggy: I found a Nettie Parks, Louis Wheeler and Gilbert Summit all living in the Macedonia, Pottawattamie County, Iowa area around 1900. Macedonia is just east of Council Bluffs, IA.

Wm Henry Crandal married Isabelle Marian McComb in 1868. He is listed with wife, and daughters Gertie C. (1869-1870) and Nettie L. (1871) in the 1880 US census living in Grove, Pottawattamie, Iowa.  Is the Gertie pictured above Netties sister?  YES this is Netties sister!!


What we know about Nettie Crandall Parks ..the lady to whom this album belonged.


Nettie's middle name is Leal.  The obituary for her is dated Friday 18-June-1943 (Nonpareil News, page 7) and says she died at the age of 72 in her home, in Council Bluffs.   She was buried in Macedonia Cemetery.

Peter Park & Harriet Elizabeth Bowman are my great-great-grandparents, through their daughter Emma Park
Emma Park
Born: 16 February 1858, Chester, Morris Co., New Jersey.
Married: Allen Walter Slagle, 2 July 1889, Macedonia, Pottawattamie Co., Iowa.
Died: 5 June 1931, Harrah, Yakima Co., Washington.
Thank you so much for purchasing this beautiful album and posting online. I have very recently made some comments to some of the photos with names and dates.
Diane