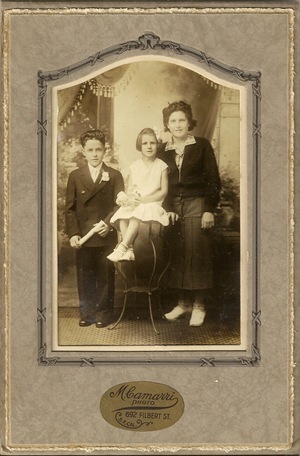 Photo Number 387
This is Albert, Gloria and Hilda.  Mike contacted me and said that Hilda was his Grandmother (Nonni) with Prozio Alby and Prozia Gloria ( Uncle and Aunt).
Hello!  My Aunt has this picture still. Curious as to how it made it's way to Massachusetts. My mom actually posted to the site, and don't know if she contacted you yet. Hilda was my Grandmother (Nonni) Prozio Alby and Prozia Gloria :)
Mike
Then an update from Mike: My Aunt says that my great grandfather had a sister living in Massachusetts.  This picture was sent to their (Hilda, Gloria, Albert) relatives (Aunts and Uncles aka Zii).
If you recall this was a photo that belonged to one of my blog readers Pam..she writes about the Antique Shop, Art blog and Forgotten Old Photo blog that all were part of this photos journey home.  Abra was instrumental in helping find the right people to contact!  Here is the story that Pam wrote: The Unlikely Antique Shop-Art-Blog Connection.


Another success story..Thanks for stopping by, do come again:)

Here is the background that Abra sifted through to find this family:)

Ooh, I am so happy this photo has been reconnected with family. Although I have been given the credit, and while it may appear I solved this on my own, this is really not the case. A great deal of the credit goes to those responses about the Italian wording that led me to search where I did. Had I not had that information, I wouldn't have had some of the 'terms' I tried in the search engines to find these three children. So, it is important when you have a clue or inkling about a photo, no matter how small it may appear, you put it in the comments, because it really helps piece the puzzle together!! It takes all of us!

Now that the suspense has been lifted, here are the rest of the details. I extracted much of the identifying information of the living, without removing the pieces about the photo subjects.

When I found the match to this photo, every part of the puzzle appeared to fit. I first found the family in the 1930 census (as I was about to call it quits—they were on the very last page I was going through--I felt as though I hit the jackpot). I built on the information with other records once I had a last name. Here goes:

The 1930 census lists Joseph Pepi, an Italian immigrant(arriving 1913), living in a rented home ($20 month), age 38, unable to read, write, or speak English. He works as a fur dresser at a tannery. He was married at age 27 to Annie, another Italian immigrant who arrived in 1920; in 1930 she is 32 (married at 22), so I assume she married almost immediately after arrival--perhaps it was an arranged marriage. She can't read or write, but does speak English. Hilda(age 8) and Albert(age5) are both in school and can read and write. Gloria is 23 months old.

Joseph Pepi registered for the WWI draft while still single. He was tall and medium build. brown eyes, black hair. He was employed by (?) Schroeder, as a fur dresser. He was born in Pia Gai Luuca Italy.

I didn’t search on Gloria, because at that time, I had enough information for contacts. Perhaps Hilda's family can fill us in on Gloria a little more! As always, this is just a small snapshot of this family and I am sure there are many more descendants then I have found.