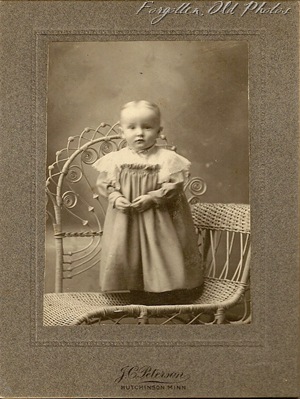 A small child standing in a wicker chair.  The photographer was J C Peterson from Hutchinson, Minn. He was in business there from 1894 to 1895.  This is another photo from the Antique Shop in Dorset, MN.  This small child has her hair parted in the middle..which is usual for little girls from this time period.   The photo is a little blurry..she must have moved while the photo was being taken. 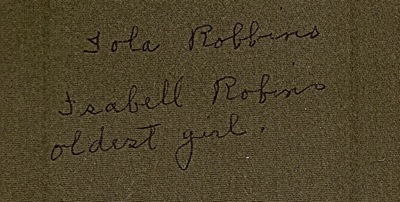 Iola Robbins  Isabell Robins oldest girl
So is that Robbins or Robins..one b or two?

Iola Robbins is the daughter of Isabelle Barley and Judson Robbins. She is 9 months old in the 1900 census (so apparently JC Peterson was in business longer than 1894-95 or someone was using his folders...I'll assume he was in business). Judson and Isabelle were married Nov 10th, 1897.

The family is living with his parents(William & Elsie) and his siblings, Clark, Myrth, Hattie, & Nettie, as well as a boarder, Henry J. Hutchinson.

Claude Lester Evans married Ilo Vivian Robbins on 27 Dec 1919 in Saskatoon, Saskatchewan, Canada. Ilo was born on 23 Aug 1899 in Hutchinson, McLeod, Minnesota. She died on 26 Jun 2005. Claude died on 13 Mar 1978. They had four children in Saskatchewan, Canada, all of which are now deceased.


Abra has left a message for a tree holder on Ancestry..we will see what happens:)