I was rummaging around in my huge box of photos..I noticed this one..and immediately recognized the children.  The kids who I call Bob and Joyce (Those names plus Grace's name is on the back of the photo, I have a feeling that these kids are relatives of Grace in Photo Number 51, I think perhaps I need to contact these people again..it has been over three months since I spoke with them on the phone..they sounded excited to meet with me to look through all the old photos..but I have heard nothing.)  Anyway back to Bob and Joyce.
I had originally featured them in photo number thirty ..today I will show you both photos again.  The first photo gave us their possible first names but no location.  This other photo has an imprint of a photography studio.  Mielenz Studio of Stanton, Nebraska. 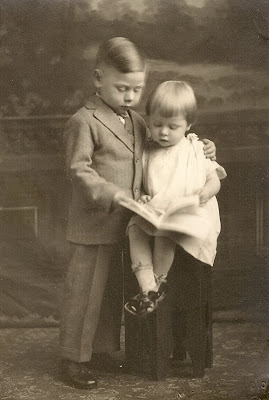 Photo Number 149
They are cute kids,  Bob seems to be really protective of his little sister. I wonder what story book they were looking at? 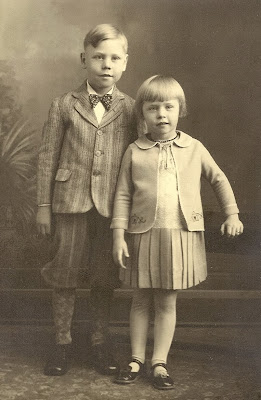 
Updates from Abra:
I entered Joyce, born in Nebraska, living in Stanton County, with a sibling of Robert. The first hit was William J (46) & Louise M (36) Freiberg. They had children Robert (6) & Joyce ML (4-2/12). That seemed to fit with the picture, but I wasn't convinced yet.

I went back to Grace's census information and found that her mother's name was Louise. Hmmm, same name as the mother of the children, but none of her siblings were Louise. I then researched a family tree where Grace was listed. I searched for a Louise--there were many, including Grace's mother & grandmother, but also a sister, who had been listed by her full name of Louise Minnie Voge. The birthdates match up with the 1930 census. Although I couldn't find her listed as Louise in 1900 & 1910 (quite possibly she is Ella or Bertha--the names & birthdates are reversed from one census to the next). I find Louisa in 1920 living with her uncle, aunt & Grandmother Meyerhenry in Featherstone, Goodhue, MN. She is 26. I would guess she got married shortly therefter, as in the 1930 census she is listed as being married 10 years (her husband to be is in Fort Kittsop,WA in 1920). Many of the Voges were born in Nebraska, so it makes sense Louisa may have moved there and lived near relatives at some point,possibly because her husband had also been born there. ~Abra


I was so excited, I did a bit more searching, being the Curious George that I am. Remember, Lucille (#3) was Walt Davison's niece (Walt is a brother-in-law to Esther, Esther a sister to Grace). Well, I always thought Lucille looked more like Esther, not Walter. I guess I didn't search closely enough last fall. Yesterday, I got to thinking--the records I found on Joyce and Bob's mom show she also sometimes went by the name Lucille. Hmm, so Lucille may be a Voge/Meyerhenry family name. I searched again, and it just so happens that Lucille's mother was also a Voge. Bertha was married to Floyd Davison, then her sister Esther married Walt Davison. Using that information, I am going to assume that Louise, who was also sometimes called Lucille, is the Ella in the 1900 & 1910 census.

I still have a hunch photo 1 and photo 37 are somehow related to this family (the Voges had several sisters). Also, although we had dated photo 1 to mid 1920s if I remember correctly, it could be much earlier, as my great-aunt married in 1914 and was wearing a somewhat similar head covering. Perhaps this is Bertha? The groom does look as though he could be related to Walt.

I sure hope you can regain contact with someone in this family, as it is a shame that these photos were somehow thought unimportant to someone. I know someone in the extended family out there would value them. We can continue to search for other family members if need be--I am sure there are many! (I sent contact info for Bob & Joyce to your email.)
Posted by Far Side of Fifty at 12:33 PM