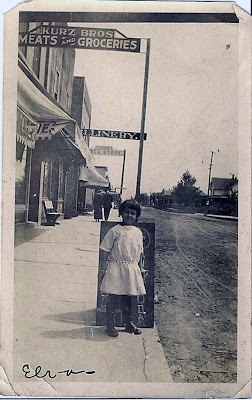 This is Elva.  She is in front of The Kurz Bros Meats and Groceries and there is a Millinery Shop in the background.  I thought this was a perfect photo to show right after all those hats that we enjoyed this past week.  I was never in a Millinery Shop..but I do remember hat sections in some of the womens better ( fancy) stores with all the hats on their little display hooks.. and large mirrors..so you could see yourself from many angles.

I did a search for Kurz Brothers..I found them in Omaha Nebraska..if this is their store..Omaha had dirt streets..hard for me to imagine.  Our daughter lived in a suburb of Omaha for a number of years, so we visited   there often.

Thanks for stopping by, do come again:)
***Update from Abra*** Some speculation that might make some sense!!
The 1900 census has a George Kurz, occupation butcher, living at 1131 North 17th Street in Omaha, confirming the probability of this being Omaha. I think it was a multiple family dwelling (apartments/divided living quarters), as there are two other families listed with that address, but they are listed as separate heads of household/family numbers. George is married, and besides his wife, there are 6 living children (Augusta is stated to be mother to 8, so two died previously). There are no Elvas or anything close. There is another married couple without children, and a married couple David & Ida High, with two children, a boy Lyle and a girl named Elba(age 5). I am curious if this could be the same girl, just because the 'b' & 'v' sound was often interchanged, especially in people with thick German accents? Of course there is really no way to know, for sure. By 1910, George the butcher has had one more child, his wife has passed (or left), he is remarried for 2 years, and now lives on Lafayette Avenue. Since he is no longer a neighbor to little Elba High, I searched for her. I couldn't find an Elba or Elva High in the 1910 census, nor her parents. However, I did find a married 'Elva' Bahr (husband Frank) in 1920, with her mother, Ida High, living with her and her husband. I can't find them anywhere in 1910 or 1930, and the SS Index lists her as Elba Bahr once again.

Is it a coincidence that little Elba was a neighbor to the butcher George Kurz, and that in one census she is identified as Elva, the same as the photo was labeled of the little girl outside Kurz brothers Meats & Groceries? By the way, I could find no other Kurz 'brothers' living in Omaha at the time, though there was a widowed Kurz living on South 17th Street. Perhaps the husband of the widow had been the other Kurz brother. Who knows?
So this could be our Elva in 1905..Elva High Bahr or Elba High Bahr?  Possibly!  Thanks Abra! :)
Posted by Far Side of Fifty at 11:02 AM