Another success!  Another photo going home!! Here is the story on Photo Number 130. 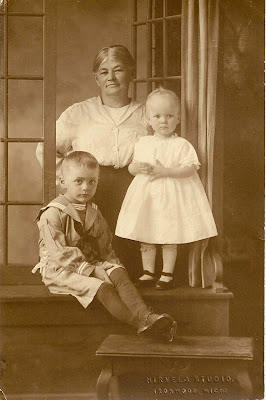 *****************************************************
This is  Grandma Tjernlund with Ruth Lundin  and Tommy Lundin.  I did find Carl and Helen Lundin in 1938 at which time a girl named Ruth was a College student.  I will date this photo at 1918 based on that info.
The photographer was Waino Hirvela at Hirvela Studio in Ironwood, Mich.  I found a Bernard and Sigrid Tjernlund in Ironwood..they had two boys. .    It is just another one of those little mysteries..
This is the second photo that I have featured with a Grandmother and her Grandchildren..a wonderful tradition as far as I am concerned!  The children in this photo seem well dressed..as for Grandma..she looks like she is comfortable in her everyday clothing.  I purchased this photo in an Antique Shop in Park Rapids, Minnesota.
Thanks for stopping by, do come again:)
***Update from Abra***
I think I have some of this mystery figured out. I found Ruth Lind, daughter of Carl and Olga, in both the 1920 and 1930 census in Ironwood. Using that information I followed this Ruth in a family tree, to pretty much figure out a lot of details. From what I have found, Ruth is still living, so I will spare some of those details until we can maybe make some sort of connection. She was born in 1918 and last lived in Antigo, WI--I can't be sure that is where she is now. I could not find any Tjernlunds, but when I went through the family tree information, It stated Olga was a Rhenlund (since this info was probably taken from the census, it's quite possible that it was just a misspelling or the name was changed somewhat over the years). I was able to come up with Olga in 1900 & 1910 with the spellings Reuland & Renlund In Ironwood. The reason Carl's wife is listed as Helen in 1938 is because Olga (Ruth's mother) passed away in 1931. Olga's mother's name was Mary (father was Erick), and I believe Mary's maiden name was Johnson. I believe it is Mary pictured in the photo. According to census information, Carl'sparents were Swedish, & Olga's parents were Finnish, but spoke Swedish.


Update:  Abra sent me Ruth's Address and also  her son Donald's Address.. I mailed them each a letter with a wallet photo..IF I hear back from them I will mail them the original.  I also requested that they share a story or two.  I sent them this blogs web address..IF they stop by I hope they leave a comment.
*****************************************************************
March 27, 2010..I received a letter in the mail from Ruth ..the little girl in the photo.
Dear Connie, Thank you for the photo. ( I sent a wallet size photo with the letter) This is Grandmother Anna Lundin with Cousin Ken Tjernland and Ruth Lundin.  I was probably One year old and Ken four years old.  Ken had a brother George, who was three years younger than I.
In this Antique shop did you happen to see two large portraits of Anna and one of her husband Gustav in a large frame?  No one seems to know what happened to them. All Tjernland and Lundin family are deceased including Tom who was a half brother.
I would appreciate it if you would send me the picture and my son and daughter would like to see them also.  Sincerely, Ruth


I will mail the photo to Ruth today!   This is a case of someone labeling a photo incorrectly..but with enough info for someone to contact the right people.  A big THANK YOU! to Abra for all her research, she is a vital link in getting these photos back where they belong!  I do frequent the Antique shop often where I got this photo and will look around and ask if there are any old large photos.


Thanks for stopping by , it was another good day on the Forgotten Old Photo blog..do come again:)
Posted by Far Side of Fifty at 11:21 AM