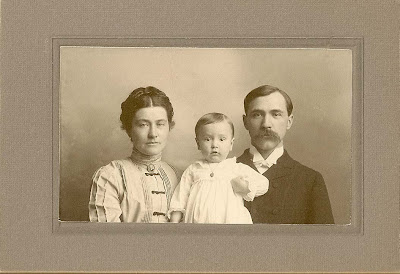 Recently I was in an Antique Shop in Detroit Lakes, Minnesota.  I went through a bunch of old photos very rapidly..choosing them for the dress styles..or for their hair styles..I chose this one..it was marked on the back.  Rev and Mrs Arthur Meilicke and Clement written in ink.  Written in pencil is Marie ( I thought this might be the Mrs. name, later I found out it was not. So it must have belonged to someone named Marie) I believe this photo was taken in 1901.  The Mrs. later learned to be Eugenia is wearing a broach or a locket with a photograph of an elderly man in it.  Clement has a heart shaped locket.

There was another photo that day, it was practically like brand new, incased in a wax paper like sleeve.  It had writing on the back..I did not read what..I just added it to my pile. 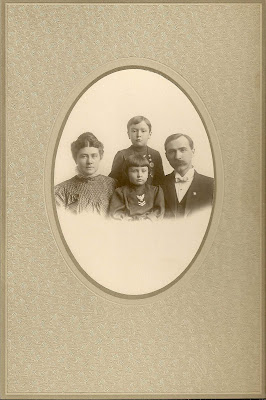 Now what would the odds be that I would grab photos of the same family?  Taken a few years apart?  I realized this after I got home.  This is Rev and Mrs Arthur Meilicke, Eugenia Strehlow Meilicke, Clement and Myron. I believe this photo was taken in 1905.  Arthur has a star shaped pin in his lapel. Clement and Myron seem to be wearing matching clothing.  Clement has a collection of star pins and various buttons.

This is what I learned in a search.  Arthur was born in a log cabin on July 01, 1872 when his parents lived in Oak Ridge, Minnesota.  In 1878 his parents moved to Elba, Minnesota, then in 1882 they moved to Casselton , North Dakota.   Arthur went to the Moravian College and Theological Seminary in Bethlehem, Pennsylvania.  He was ordained in Goshen, North Dakota.  He was called to Hector, Minnesota and then to Wisconsin Rapids.

He married Eugenia Strehlow on October 12, 1898 at Casselton , North Dakota.  I think that he probably met his future wife when his family moved there in 1882..perhaps they went to school together.  Casselton is not a very big "town."  Anyway they had five boys, three who lived.  Clement, Myron and Francis.

I believe that Clement graduated from Wisconsin Rapids High School in 1919.  He and Helen are in the 1930 census in Winnebago, Wisconsin.  Helen  died in 1992 in Sheboygan, Wisconsin.

I couldn't find anything out about Francis.

There must be relatives of these people out there someplace.  If they contact me, I am more than willing to mail them these photos.

I  would also like to encourage people, if you are searching for your relatives..keep doing searches every once in awhile on the Internet..someone may have shared something about your relatives on a blog!  I bet within a week or two these photos are headed home.
Thanks for stopping by, do come again:)
**Update** March 31. 2010
These photos are headed home..more details to follow soon:)


****Update : May 31, 2010
ameilicke left me this information..I do thank him for sharing what he knew about this family!
Francis became a doctor and lived in Bethlehem, PA. My aunt Myrtle, now 106, lived with him and was a school teacher and eventually the Headmistress of the Moravian Prep school there. Carl Arthur is my great uncle.