This is a Cartes d’ visite  or CdV.  It is from the Antique Shop in Solway, Minnesota. 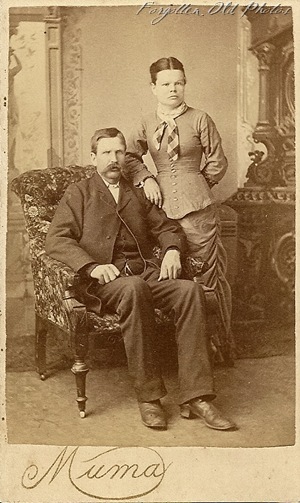 I learned earlier today that men in the 1860’s and then again in the late 1870’s to early 1880’s buttoned their coats at the very top button only. Of course this is just a general rule to follow. This is not a 1860’s photo.  It fits the early 1880’s much better. During the early 1880’s women wore severe or close fitting dresses, it might have a bustle, lots of buttons in rows, she would wear her hair plain or with curls and usually pulled back away from the face. This couple also looks like they are relaxing in a fine country house, which is typical of photos in the 1880’s. 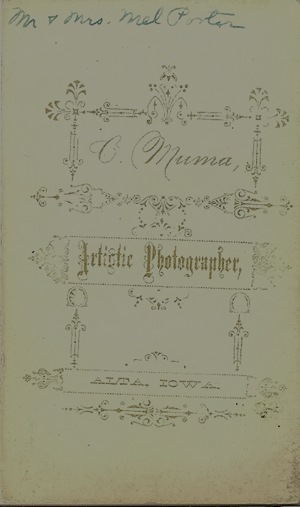 This may be Mr and Mrs Mel Porter that had their photo taken by Muma in Alta, Iowa.
Thanks for stopping by, do come again:)

Update on the Photographer:
Charles Muma was my great-grandfather. He was born in Canada in 1847. He got married to my great-grandmother, Pauline Paulson in 1883? in Buena Vista County. They moved on to Holstein, Ida Grove where he had a photography studio. He went on to Canton, South Dakota where he died in 1921.