I think we will look at a few photos that have names.  I purchased this photograph at Solway, MN it is a Cabinet Card. 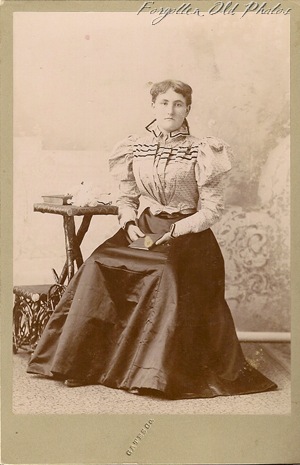 There is an imprint..it says Gates Co.  I wonder if that is the photographer?  I would date this photo right around 1895 because of the huge puffy sleeves on the blouse.
I do have a name and some dates.

Poor Dora died young. If she died during childbirth, the baby, if he/she lived/existed doesn't appear in the 1910 census with George.
Info on the photographer:
I believe the photographer is George F. Gates of Chicago, Illinois (the groom was from Illinois).


A Fashion note from Norkio!
I have a reproduction blouse pattern that is virtually identical to that blouse. It's actually nice to see it represented in a period photograph! The sleeve is made in three pieces - two at the puff (a regular shape inside and the puff outside) and one for the rest of the sleeve to the cuff.

I would also like to take this opportunity to point out something we don't ever even think about today. Notice you can see both of her knees pushing her skirt out? Women used to sit with their knees wide open to hold the skirts out of their laps. It makes for a more attractive lap too, with the skirts all smoothed out. It is actually much more comfortable and relaxed than sitting with your legs pressed together. :-) It also helps when you stand up, the skirt isn't bunched up between your feet so you won't trip.

Great photo showing some lost points of etiquette and fashion. Thank you!!!