This photo had quite a response.  Three different relatives left messages for me.  Donna a Granddaughter, George a Grandson and Darrin a cousin. 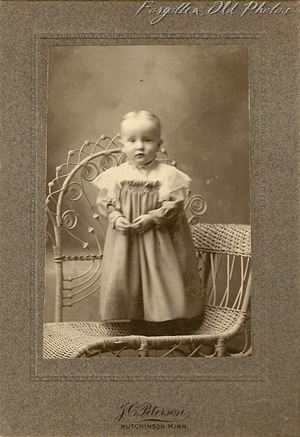 This is Ilo V Robbins, she was Photo Number 416.

I have returned the photo to her Granddaughter Donna.

She emailed me yesterday that she received the photo…she wrote:

I found you through a link on facebook that was sent to a friend of my sisters, we have tried to trace the man who sent it but we do not know who he is, but we are trying to find him.

It was very interesting, I recognized the photo because my mom had a very small replica of it in her photo collection, I am thinking it may be the proof copy of the photo you have, but not sure.

My grandma Ilo Vivian Robbins Evans was an awesome woman, she spent her whole life carrying for her family....her family was the most important thing in her life, she had six daughters and one son, her son died as an infant . Of her six daughters of whom my mother was the second oldest, two have died and  three are living in Canada and one in the USA.

Grandma celebrated her 105 th birthday in 2004 and was one month away from reaching 106 when she died,

One of the stories Grandma told us at her 100th birthday party was how she used to ride with her father who was a pony express rider to go to meet the stage coach and pick up the mail for their town and her story ended by telling us how she had had one of her greatgrandaughters teach her how to send an e-mail......what a heritage we had through our Grandma.

Grandma always insisted that the butter on the table for a meal needed to be on a "butter dish" and it was to be changed after every meal......as children we learned quickly that this was a rule not to broken, LOL....if it was there were dire consequences for the guilty one who had cleared the table for that meal.

We all loved her dearly and miss her very much as she was always the centre of every extended family gathering.

I am very thankful you have taken the time to do the research to get this wonderful photo into our hands.

Thank you and in the words of my Grandma Ilo......God will bless you for every kindness.

I emailed copies of the photo to George and his wife Tammy.  They really enjoyed getting the photo!

Darrin has not contacted me, but if he does I will email him a copy also.

It is sometimes difficult when more than one relative wants a photo, but I try to do the best that I can.

I know that Abra left a message on Ancestry and I believe that Iggy was probably the one that left a message on Facebook.  Both Abra and Iggy are instrumental in finding home for many of the Forgotten Photos..and I thank them!! They are both awesome!

Iggy was intrigued with the name Ilo..and this is what he found out:

I was intrigued by Ilo's name and found that there was a very brief (1899 only) period where people were given that name. Curious as to why, I discovered that the Spanish-American War was closing up and that US forces under Admiral Dewey in Manila, Philippine did some "mopping up" work in Ilo-Ilo, the second largest port in the Philippines. The dispute over Ilo-Ilo lasted several months and ran into the first months of 1899.