This is another Lockwood photo. 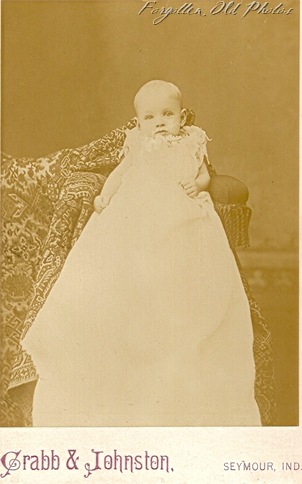 This is May Indiana Gladys Lockwood age four months.  I believe that May was born in February of 1892.  So this photo would have been taken in June of 1892.  The sleeves were short on her gown most likely for the warmer summer weather. The photographer was Crabb and Johnson of Seymour, Ind.

There seems to be some differences in how her name was spelled..Mae or May.

Iggy found this info when we were researching the Lockwood Family.


This little gal May..had quite a name.  Indiana cannot be a very common middle name.


Thanks for stopping by, do come again:)


Here is the link to Mae L. Taylors headstone..I have a feeling that she may have used her maiden name of Lockwood in her adult life.
Posted by Far Side of Fifty at 4:20 AM