This is one of the missing pieces of the Lockwood Family.  I only know about Fay because of her beautiful little tombstone that can be found here.  It is photo number 4851 at the Walnut Hill Cemetery. 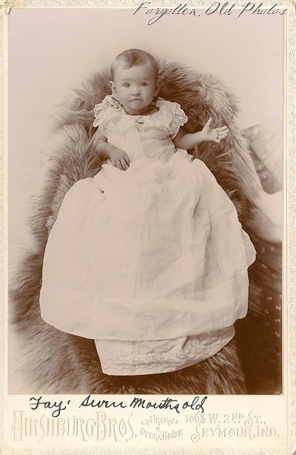 Fay Seven months old.  Fay was born right around October 15, 1893.  This photo was taken in May of 1894. Fay died September 07, 1894 at the age of 10 months and 22 days.  Fay was the third daughter born to Stephen and Esther Lockwood.  In 1894 Smallpox was an epidemic in Indiana.  We don’t know what Fay died of..anything is possible..Whooping Cough, Typhoid Fever or Spinal Meningitis were all terrible diseases back then.

Much later sometime after Ruth Dale Lockwood was born in 1897, Stephen and Esther had another daughter and to confuse things even more they named her Fay also.  I am not sure why people did this?  Any ideas?