We will look at some babies in carriages! 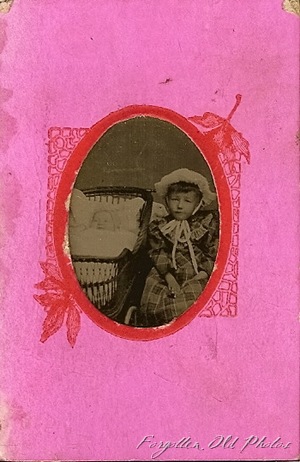 This is a Gem Tintype, I purchased it in Grand Rapids, Minnesota.  Gems are very small.  The actual photo is 1 inch by 1 1/2 inch, then it is put into the paper frame.  The whole thing measures 1 3/4 inch by 2 3/4 inch.  This one seems to have a decorative stamp around the opening. I have not seen one like it before.

Gems are sometimes said to be the size of a postage stamp.

Sometimes when a tintype was made a multiplying camera was used, more lenses were added to the camera box and many images could be created at once.  They were cut apart and put into folders, locket or frames.  You would have a number of images to share with friends and family..or to mail to family far away.

We will make no assumptions about the pink color either..pink used to be “the boy” color years ago. Pink was in the family of red colors and considered bold.  Blue was considered more dainty and for girls.  Thoughts on colors changed after WWII according to some sources and not until the 1950’s according to others.

So we don’t know the gender of the baby in the carriage, but we can assume that he or she has an older sister..at least I think so because of the hat.  The year?  It could be anytime 1860 to 1900.