This is a photo from blog reader Jim.

I just came back from a short trip to Ohio, where I stole a few minutes to go to one of my favorite little antique malls.  It's very small, but is PACKED with stuff from probably over fifty dealers.  There, I picked up four more vintage group photos.  Two of them had names on the back, and another was so interesting, I thought your readers would enjoy the mystery of it.

It's a photo of a family of thirteen -- Mother, father, nine sons, and two daughters.  There are no location stamps for a studio, and no notes of any sort on the back.  However, there are some pencil marks on the FRONT of the photo.  Someone went through and labeled their family members.  With few exceptions -- Dan, Will, Mother, Henry, Ed, Al, and Mary -- there is nothing but an initial.  The only lead -- and I figured only Iggy or Abra would be able to dig deeper -- was an additional written name under Mary's photo.  Could VOLSK be a married name? 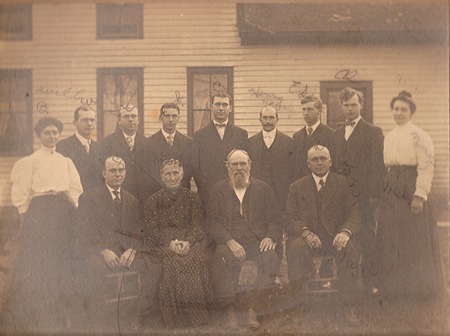 I found it curious that initials were used for identification..and that Mother was written..but not Father..and Henry was written in a totally different hand and I am positive that is Dan..three times Dan!

Thanks Jim for sharing your old photo! :)